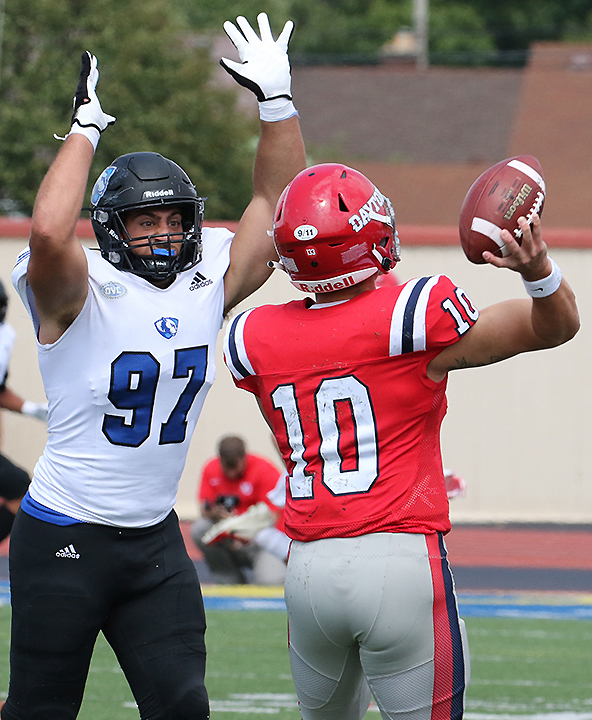 The Eastern football team had their first lead of the season going into halftime Saturday afternoon, but penalties and turnovers led to a 17-10 loss to the Dayton Flyers.

After not playing a single game of football in 658 days, Dayton came to Welcome Stadium on Saturday afternoon to prove to the Eastern football team that they have been ready.

It was the first time in program history that Eastern, now 0-3, competed against Dayton.

Eastern head coach Adam Cushing said that a combination of turnovers and not executing third down conversions led to the loss on Saturday.

“We continue to turn the ball over and do things that losers do,” he said. “With nothing else to field on defense and on offense we turned the ball over, we chewed ourselves in the foot and that’s what you are going to get. You can’t play a decent quality game.”

The game remained scoreless for the first 15 minutes until sophomore kicker Stone Galloway managed to convert a 37-yard field goal attempt, giving the Panthers their first lead of the season.

The Panthers gained 299 yards of total offense and were 5-of-15 on third down conversions.

Dayton’s offense gained 266 yards of total offense and were 9-of-18 on third down conversions.

Cushing said that struggling offensively three games into the season is not to be blamed on just one person.

“We are not doing what we need to do,” he said. “It starts with me first and foremost, and then goes down to the coaching staff, and then goes to the players. It is not one person making mistakes, it’s a little bit of everybody and the problem is, offensive football is not that way. Offensive football requires all 11 plus the coaches to be on their stuff and go give the guys a chance to win on that particular play.”

Redshirt sophomore Chris Katrenick started the game in the quarterback position for the Panthers. Katrenick was 12-of-27 passing for 129 yards on the day with 1 interception.

A quarterback change came in the fourth quarter for Eastern, allowing Otto Kuhns to enter the game.

Dayton had 17 unanswered points in the second half until the switch was made.

Cushing said the decision came after he saw his team struggling to move the football.

Cushing said that he was proud of Kuhns for stepping up on Saturday despite battling an injury earlier in the week.

“He just kept on coming along and got a lot of reps,” he said. “I just give him a lot of credit for being out there in the game and being ready to step up. I am really proud of him for that and he’s got to continue to come along and get better,”

For Dayton, quarterback Jack Cook got the start and was 18-of-32 passing for 134 yard and 1 touchdown and running back Jake Chisholm ran 65 yards on 9 carries with 1 touchdown.

Cushing said that the defense can continue to perform well as the season progresses if they continue to take the next step.

“I think that we can be really good defensively and it’s all going to come down to us just continuing to take the next step and getting one percent better,” he said. “We are obviously doing some really good things; they do a good job of occupying the football. I think the sky’s the limit for this group defensively.”

Eastern will be at home for the first time this season next Saturday as they face Illinois State in the 109th Mid-American Classic.