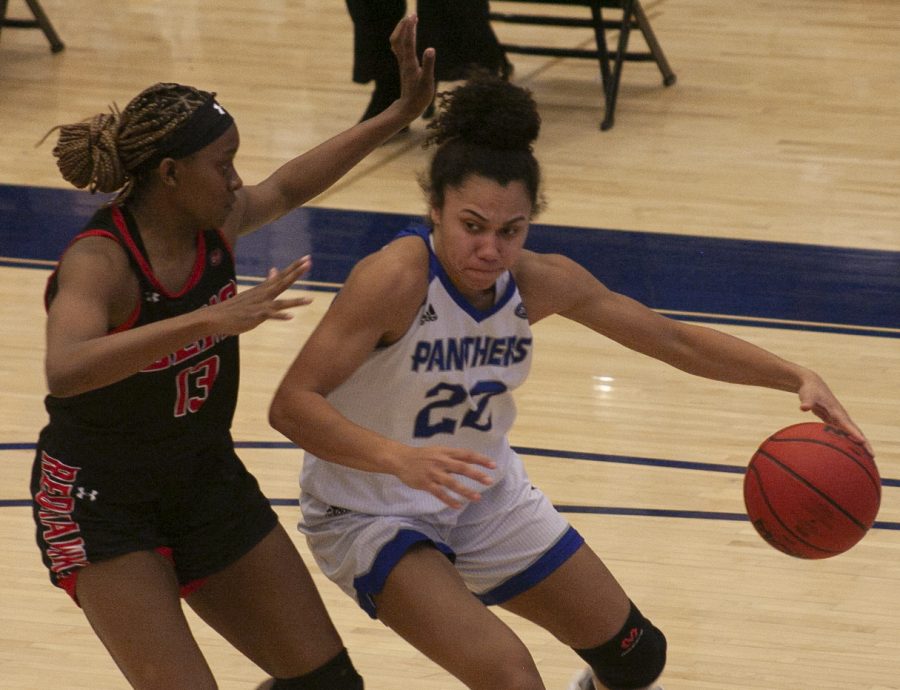 Eastern guard Lariah Washington drives toward the basket in a game against Southeast Missouri on Feb. 25, 2021 in Lantz Arena. Washington scored 24 points in the game, which Eastern won 65-57.

The 2021-22 schedule for the Eastern women’s basketball team was announced Thursday.

The Panthers will be attempting to make the OVC Tournament for the third-straight season.

There is one exhibition game on the schedule against Illinois Wesleyan on Nov. 3 in Lantz Arena before the regular season opener against Lindenwood on Nov. 9, also at home for the Panthers.

There are a total of 12 nonconference games scheduled for the Panthers this season, including a rather exotic road trip.

Eastern will be participating in the University of Hawai’i Tournament from Nov. 26 to Nov. 28 in Honolulu. Also competing in the tournament is Hawai’i, Gonzaga and Utah.

After getting back from the Pacific, the Panthers will head to Macomb to play in the Compass Tournament, hosted this season by Western Illinois.

Eastern’s final nonconference game this season will be against Big Ten opponent Wisconsin.

The Panthers played the Badgers back in Nov. 2019, with Wisconsin winning 63-55.

Conference play will begin Dec. 29 when the Panthers play Morehead State on the road.

The Panthers’ final conference game is also noteworthy this season.

Pace is a graduate student at Austin Peay, taking advantage of extra eligibility after starting at Eastern for four years. She ranks 11th in program history with 1,387 points.

Eastern had a conference record of 9-11. The OVC is two teams smaller this season than it was last season, with Eastern Kentucky and Jacksonville State leaving for the Atlantic Sun.

The OVC teams will all play each other twice this season, once at home and once on the road.

Washington averaged 14 points per game, ranking eighth in the conference.