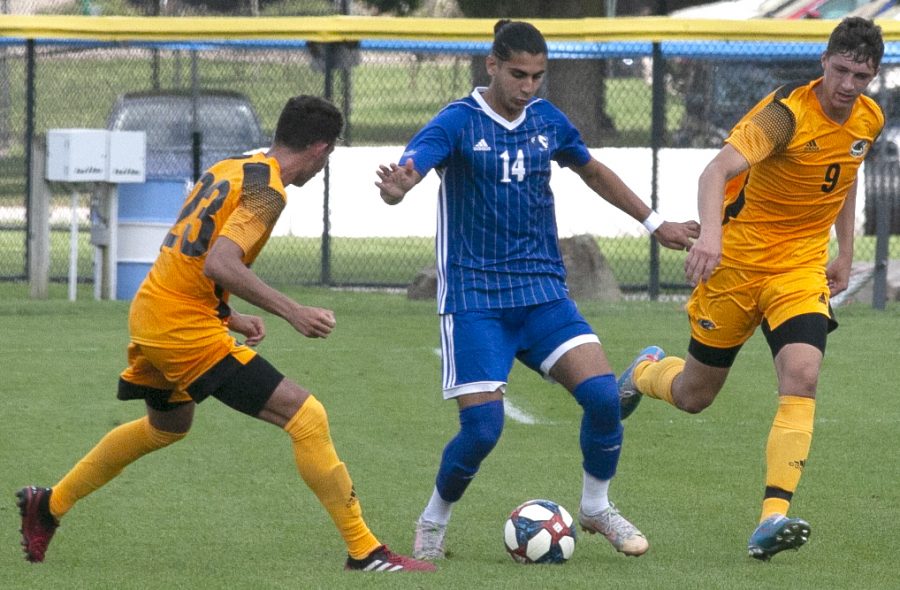 Eastern redshirt-junior midfielder Munir Sherali tries to keep the ball away from two Milwaukee players in a match Aug. 30 at Lakeside Field. The score was tied 0-0 at halftime when severe storms forced the match to be declared a no-contest.

The season has just begun for the men’s soccer teams of the Summit League, but so far wins have been hard to come by.

The combined record of the conference’s teams is 2-8-1, although those matches have come against various levels of competition with several Summit League teams playing nationally ranked teams to open the season.

Denver opened the season 1-1. This has them tied atop a very early version of the conference standings.

The Pioneers suffered a 3-0 loss in the season opener against Oregon State, currently the No. 22 team in the nation. Denver then bounced back with a win against Portland behind an early goal from junior midfielder Aidan O’Toole.

Oral Roberts took a similar road to its 1-1 start.

The Golden Eagles also lost to a ranked opponent in the opener, falling 3-1 against No. 15 Loyola Marymount. They then won 2-1 against University of Texas-Rio Grande Valley. Forward Dante Brigida, who scored the lone goal in the opener, also netted one against UTRGV. He was named the Summit League Offensive Player of the Week for the first week of the season.

Kansas City has had the most challenging schedule so far in the conference.

The Roos opened the season against No. 15 Virginia Tech and No. 21 James Madison, playing respectably in both matches.

Against Virginia Tech, Kansas City took the lead on an early penalty kick goal from freshman midfielder Edson Murguia. Later in the first half, the Hokies scored a pair of goals in just over 90 seconds to claim a lead before the Roos tied the score midway through the second half.

Kansas City was unable to get on the board against James Madison, falling 2-0 to the Dukes.

With 8 saves against Virginia Tech and 6 more against James Madison, Kansas City senior goalkeeper Cooper Clark was named the Summit League Defensive Player of the Week.

Eastern is the only Summit League team to have played just one match to completion. The Panthers fell 1-0 to Xavier to open the season and was tied 0-0 at halftime against Milwaukee at home on Aug. 30 before severe thunderstorms forced the match to be declared a no-contest.

Against Xavier, Eastern forward Julian Smith got off 3 shots and midfielder Kevin Lanham recorded a shot on goal, but the Panthers were outshot 12-8 in the match. Goalkeeper Jonathan Burke recorded 5 saves, but sophomore midfielder Jerome Jolly got one by Burke in the 79th minute to give Xavier a late lead, and ultimately, the win.

A trio of teams have started the season 0-2.

Omaha is 0-2 after a pair of 1-0 losses against Bradley and Tulsa, with the latter having received votes in the NCAA Rankings this week but falling short of the top 25.

The men’s soccer team from St. Thomas made its Division I debut this past week after making the jump from Division III.

The Tommies fell in their first two matches, falling to Houston Baptist 1-0 and Incarnate Word 2-0.

Western Illinois, like Omaha and Eastern, has not scored a goal this season. The Leathernecks lost 2-0 to Central Methodist and 1-0 to Drake.

Nonconference play will continue until later this month when conference matches will start taking place.