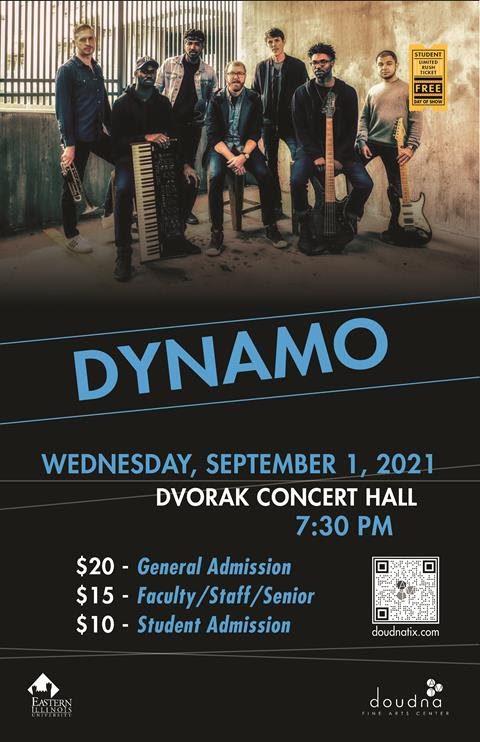 The Doudna Fine Arts Center is kicking off its concert season with a performance from Nashville touring band Dynamo Wednesday night at 7:30.

According to the band’s website, Dynamo’s music “fuses jazz, rock and funk with elements of soul and R&B.”

This event has been in the making since January, when Doudna’s director of programming, publicity and promotion Dennis Malak first reached out to the group after recommendations from students.

“I contacted them in January, we just started talking about things and trying to get them on the books early,” Malak said. “I knew that things were kind of tentative back then because of the whole COVID situation, wasn’t sure what we were going to be able to do but I wanted to get them penciled in on our calendar so that if things continued to progress in a positive way, as they were over the spring and summer, we can move forward, and so that’s what we did.”

Tickets for the show, located in the Dvorak Concert Hall, are $20 for general admission, $15 for Eastern employees and $10 for Eastern students. Malak also pointed out that there’s an opportunity for students to get free tickets before they run out.

“Currently right now, one of the things that we’re really pushing is, we expect to see a lot of interest tomorrow is, for students of Eastern Illinois University we’re offering student rush tickets,” Malak said. “So the day of the show, we’re offering free tickets to any student… if they’re still available. So, if we still have tickets available, which we do currently, tomorrow when we open, the first 50 students to show up with their ID get in for free.”

Malak had high praises to sing about Dynamo’s sound.

“They’re really good, they’ve got a really unique style and sound and it’s something that’s very different and I think people will really enjoy it,” he said.

The band’s 2017 record “Celina” was, according to the band’s website, recorded “in front of a live studio audience,” and is “completely free of overdubs.”

This live chemistry, coupled with the fact that the band is nearly nine years into its journey, likely make for a performance that is sure to start Doudna’s concert season off strong.

Dynamo’s Spotify biography hints at what could be in store for Wednesday’s attendees. “The culmination is a sound that’s both spontaneous and composed- and an energy that’s undeniably infectious.”