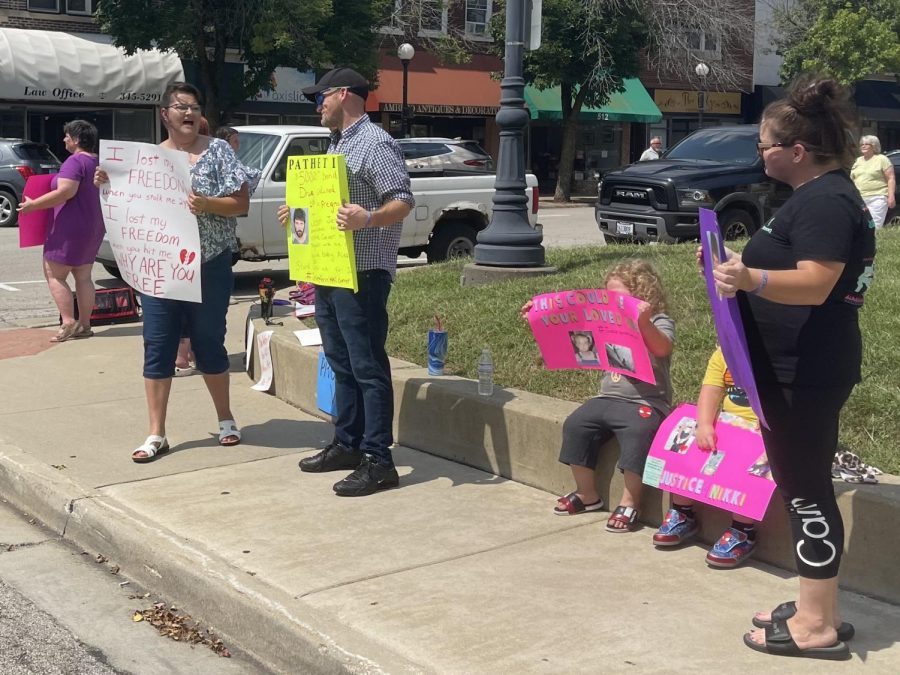 The protest was organized by JoDee Gravil, who founded the group Justice in Coles County. Gravil said what began as sharing her story has turned into a movement.

With many beginning to voice their opinions on the happenings in the Coles County Courthouse on social media, some decided to speak their mind in front of the courthouse.

Beverly Nichols is one of those people.

“I would like to see the judge and state attorney fight for the victims with appropriate bonding,” Nichols said. “There are just too many that are walking the same day they’ve been arrested and it’s ridiculous. It’s infuriating.”

Gravil said it is something everyone should be concerned about.

“It affects everyone. If you’re not a victim of crime or a family member of crime, it also affects businesses because crime rates are growing quickly in this area and people don’t want to live in a city or a county where the crime is growing and not being taken care of, so it’s going to affect everyone in one way or another,” Gravil said. “So, I think everyone needs to be aware of what’s going on. People deserve to feel safe in their homes, their town and their county.”

Nichols said one of her biggest concerns is that crimes are not being deterred.

“We have rapists, pedophiles, domestic battery people that have walked on less than $5,000 cash on a $5,000 bond,” Nichols said. “I’m sorry, but that is not how to curb crime, you’re supposed to deter them from wanting to commit these crimes. Higher penalties, less crime.”

State Attorney Jesse Danley said he has to comply with current Illinois laws, whether he agrees with them or not.

“We do our very best here to honor the spirit of the law and to follow the law, regardless of whether we agree with it. Do I personally agree with a lot of the bond statues? No, I don’t,” Danley said. “I don’t.”

He said that with repeat offenders, he “would much rather have them in custody, awaiting trial where they’re not creating new offenses and more work for my office.”

Danley added he supports everyone’s right to assemble, and Gravil said she is going to do just that.