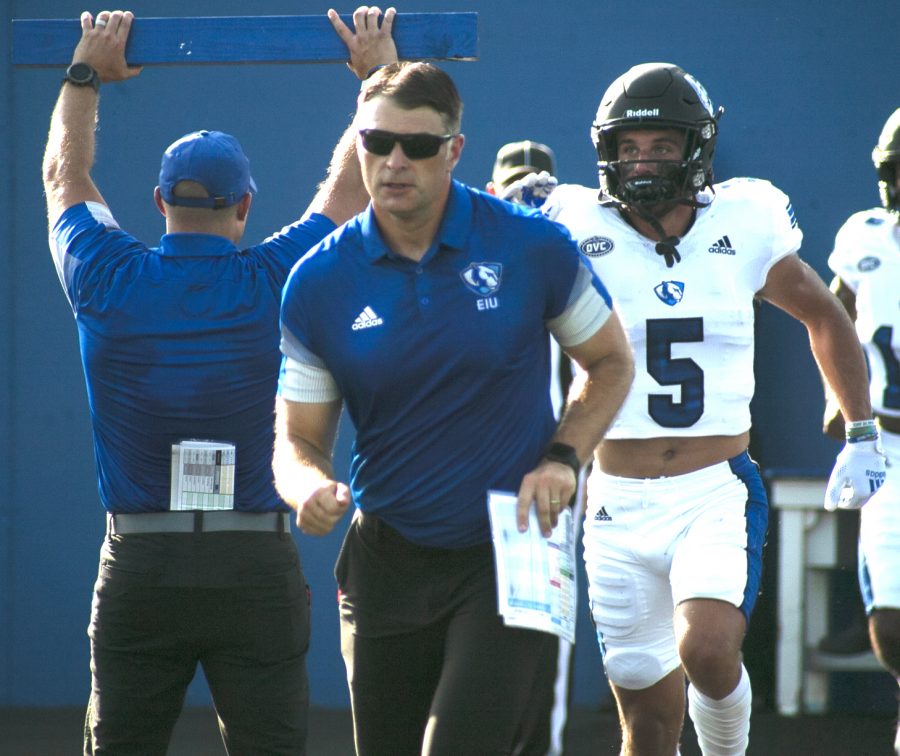 Eastern head coach Adam Cushing leads wide receiver Matt Judd (5) and the rest of the team onto the field prior to the game against Indiana State Aug. 28 in Lantz Arena. The Panthers lost the game 26-21.

The Eastern football team had cut the lead to three late in the fourth quarter Saturday evening, but a late safety call led to a 26-21 loss to Indiana State.

Eastern was driving down the field a few minutes into the fourth quarter with the Sycamores leading 17-14 when Indiana State defensive back Michael Thomas intercepted a deflected pass and ran it back for a 75-yard touchdown to go up by 10.

The Panthers were able to score another touchdown, but Indiana State held on for the win.

Head coach Adam Cushing said he was disappointed with the results but remained optimistic about the team’s offensive performance.

“Well, we didn’t get the results we wanted,” Cushing said. “But there’s certainly some good things that happened out there today. The offense moved the ball pretty well and we got to be the Panthers again.”

Eastern allowed the Sycamores to put up 9 points as a result of 3 turnovers.

“We turned the ball over in the redzone and gave them 9 points on the scoreboard,” Cushing said.

Eastern’s offense put up a total of 378 yards with running back Harrison Bey-Buie leading the team with 11 carries for 57 with 1 touchdown.

Eastern wide receiver Tyler Ringwood led the team with 116 receiving yards for the Panthers, including a highlight reel one-handed catch along the sideline.

Cushing said he was satisfied with the team’s performance on both sides of the ball but noted that the team struggled with the little things on the field.

“We did a lot of awesome things,” Cushing said. “It was a really strong effort on both sides of the football, but we just didn’t do the little things that add up to victories.”

Quarterback Otto Kuhns got the start against the Sycamores after starting three games last season and appearing off the bench in another.

During his first career start last season, Kuhns was 19-of-30 passing for 145 yards, ending the season with a career high of 153 yards.

“He played pretty well,” Cushing said. “Overall, I thought he gave us a great chance to win the football game. I thought he did what we wanted him to do which was keep some plays alive. We just got to coach him to make a few decisions here and there a little bit better.”

Indiana State’s offense was led by quarterback Anthony Thompson who was 13-of-37 with 87 yards and running back Peterson Kerlegrand with 19 carries for 74 yards with 1 touchdown.

Cushing said that the team is learning from Saturday’s game by focusing on the things that went well.

“Just highlight the positives,” he said. “A bunch of really good things happened. Our guys battled hard. Our running backs were breaking tackles and extending long runs. We really just settled in and played our game.”

Cushing said he and the team were grateful for the opportunity to play early in the season, and they are adamant that everyone should expect this season to be a long one

“To get the opportunity to play early is fantastic,” Cushing said. “We intend this to be a really good, long season.”

Eastern will be on the road for their next game on Sept. 4 against South Carolina.