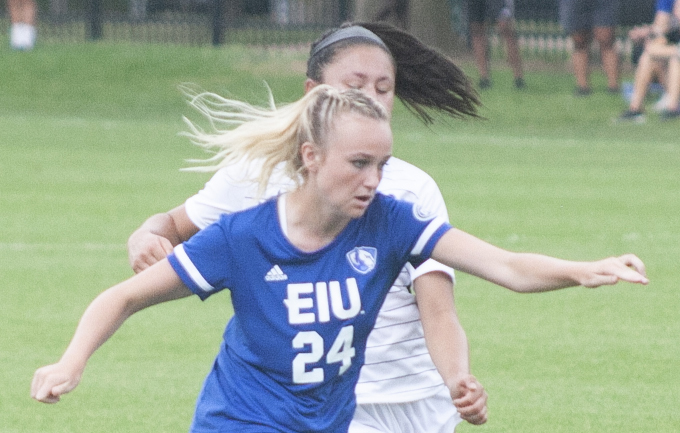 Eastern sophomore midfielder Cam Korhorn dribbles by an Illinois Springfield defender in a match Aug. 22 at Lakeside. The Panthers won the match 3-0 for their first win of the season.

Jake Plant, coach of the Eastern women’s soccer team, said he was very satisfied with his team’s play over the past two matches. The Panthers lost 3-1 on Thursday versus Indiana State before rebounding on Sunday to win 3-0 against Illinois Springfield.

Plant said that both games showed how deep EIU’s team is, and he has been impressed with his players so far this season.

“This fall, we are back to our best with it and we have started to look like our old selves,” he said.

Eastern’s offense has gotten off to a productive start this season with three players already finding the back of the net in two games. However, it’s not just the scoring alone that has impressed Plant.

While the goal scoring has been noteworthy, Plant also said that each player has been playing their roles “to a high standard.” He has been looking to cultivate a team with both good technique and high IQ, which he says is growing every day.

When looking into more specific aspects to how the team has played, Plant said the team is averaging 60 percent possession per game. This means the Panthers are keeping the ball more than their opponents and thus setting up more goal scoring opportunities.

That high percentage of possession is no accident either, with Plant noting that keeping the ball and building up possession is something this team has been training for in practice. In building up this possession with his three defensive-back line, Plant said this can frustrate opponents.

The heavy emphasis on possession has been working in the Panthers’ favor, especially against Illinois Springfield. The team was able to create fifteen shots, including eight on goal.

Of those fifteen shots, junior midfielder Nicoletta Anuci capitalizing on two chances to record two goals, and junior forward Michaela Danyo finding the back of the net on one occasion as well.

Last Thursday, while not reaching fifteen shots, the team still sent nine shots towards the goal, with junior forward Zenaya Barnes finding the back of the net.

With Eastern now heading into a two-game road trip, Plant said he’s excited for the challenge Fort Wayne and Wisconsin will bring, saying that both teams’ “different styles of play will test us in the transition and the way we defend set pieces and the top of our eighteen-yard box.” Essentially, win or lose, Plant will try to use these two games to keep helping the team improve in different ways.

When asked about the Panthers’ goal for this season, Plant said they are going, “for the OVC Tournament.” He said this team is hungry and wants to not only qualify in a high position but win the whole tournament, as well.