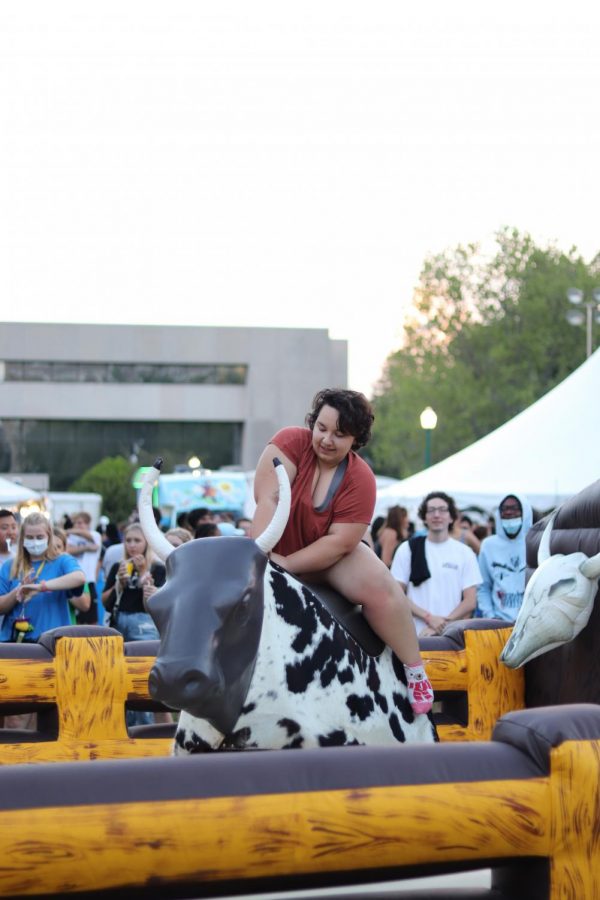 Chaotic screams filled the south quad Saturday night for the Quakin’ the Quad event while students try to tame one of their favorite attractions, the bull ride.
Attractions included bingo, Velcro axe throwing, bull riding, obstacle courses like The Meltdown and a dizzy maze, jousting, a “Hungry Hungry Hippos”-like game, giveaways, and free Domino’s Pizza and Kona’s shaved ice.
The bull ride was one of the most popular attractions, with a line wrapping around the inflatable.
Rashad Oliver, a junior digital media technology major, said that this is his second time being at Quakin’ the Quad and that he rode the bull.
The bull ride starts off slow then begins to thrash around while the rider tries to holds on.
Drew Smith, a freshman political science major, rode the bull several times with his best time being twenty-six seconds.
Smith said he came to the event to have a good time and to enjoy the free food.
This event benefits the community by helping students meet their peers while having fun.
Taryn Wilson, a freshmen pre-nursing major, said she came with new friends she met that morning.
Wilson and her friends went on an inflatable called “The Meltdown.” The Meltdown is an obstacle course where you must duck and jump to avoid getting hit by the spinning “arms.”
“It’s a lot harder than it looks,” Wilson said. “I thought I was going to nail it, but I failed hard.”
Wilson said that after quarantine, socializing was very hard so being able to come back and to not feel alone has been very welcoming and comforting.
Students expressed their gratitude that the event had happened normally.
“I really missed being outside, I miss EIU being open and social,” Oliver said. “COVID [messed up] everything and made it suck.”
Incoming freshmen weren’t the only ones that enjoyed the event; transfer students and upperclassmen were involved as well.
Yolanda Botello, a junior transfer student and special education major, participated in attractions including inflatable jousting and said that being on campus was a lot of fun and a nice change of pace.
Even faculty joined in on the fun. Anne Flaherty, Vice President of Student Affairs came with her family to join in on the festivities.
Flaherty said that she rode the bull and walked around and talked to students.
Flaherty said that she wanted Quakin’ in the Quad and the rest of Welcome Weekend to create opportunities where students could come together and meet other students to find their place at Eastern.
Most of the attendants expressed relief that they could go to events like this for the first time in a while.
Justin Richards, a graduate student studying strategic communications who was helping at the event, said that his first year at Eastern, COVID didn’t exist, so the event looked like this year’s.
“I’m just really happy to see Panthers out and having fun, EIU is finally back,” Oliver said.