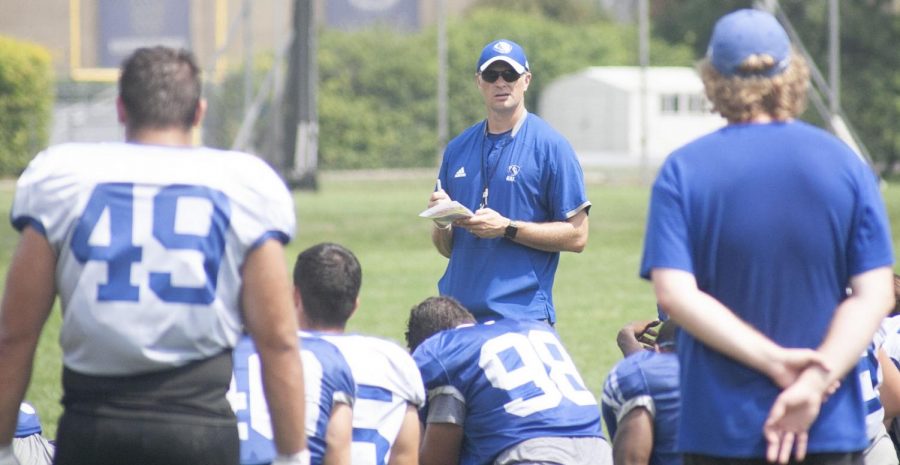 Eastern head coach Adam Cushing addresses the team after practice Aug. 20. The Panthers are preparing for the season opener on the road against Indiana State Aug. 28.

The Eastern football team is now in its first game week of the season. The regular season opener against Indiana State is set for Aug. 28 in Terre Haute

As offseason preparations switch to regular season game planning, head coach Adam Cushing said he is happy with how things have been progressing.

“What I’m pleased with right now is that our intensity has started to pick up some more, which is pretty awesome,” Cushing said. “It’s a mark of a good football team that’s going to hold each other accountable to that level of play all the time. There’s lots of stuff we’ve still got to clean up, there’s lots of coaching to be done. But if the show up, especially in this type of heat with intensity, we’ve got a chance to get them better.”

On the field, a major change will take place at the quarterback position this season for the Panthers. The departure of Harry Woodbery, who played in 27 of 30 games in the past three seasons, led to an open competition for the role of starting quarterback.

Kuhns appeared in four games for the Panthers last season, including three starts, but is still a freshman in terms of eligibility since last season did not count for players’ eligibility.

Cushing said that the competition has been strong throughout, making the decision very tough for the staff as the start of the season looms.

“It’s been an unbelievable competition,” he said. “I’m upset and glad I don’t have a decision right now. I’d love to have the decision, but it’s a great problem that the quarterbacks have given us, to have this battle go all the way down to the wire.”

Whoever the quarterback, or quarterbacks, may be this season, they will have some returning skill players to give the ball to.

Wide receiver Isaiah Hill missed all of last season due to injury, but should prove a valuable target when he returns to the field.

He led the team in receptions in 2019 and his 7.5 receptions per game ranked 31st in the FCS and sixth all-time in Eastern history.

DeWayne Cooks Jr., Last season’s team leader in receiving yards, will also be back, as will superback Jay Valle, who led the team in receptions and receiving touchdowns last season.

Sophomore running back Jaelin Benefield is back for a third season. He rushed for 258 yards last season and also caught 9 passes for 60 yards out of the backfield.

On the other side of the ball, likely the Panthers top performer last season was sophomore linebacker Jason Johnson. He was named First Team All-OVC after a season in which he led the OVC with 11 tackles per game, ranking ninth in the FCS.

“I can’t say enough good things about Jason, and it starts out here on the practice field. That’s why he has success,” Cushing said. “There’s no coincidences. We say all the time, ‘you play the way you practice.’ Jason shows up with a workman’s mentality every single day at practice and nobody practices harder than Jason does.”

Cushing said that a product of Johnson’s work ethic has been that the defense as a whole works harder as well.

“The defense is following him,” he said. “Jason has stepped up as a leader, and everyone understands how he plays and wants to play just like him.”

As Cushing enters his third season as Eastern’s head coach, the players he originally brought in are now upperclassmen on campus. He said that this group has been on the forefront of working to grow the program.

“We smile about it as coaches, just to see the progress that the program has made, and it’s been on the backs of those guys,” he said. “Those guys have really wanted to be great. They’ve gone through some really trying times obviously, but they’ve just kept their nose to the grindstone and kept working. We’re so proud to see where they are right now because of how hard things were. They faced adversity and just kept coming back and getting better day by day.”