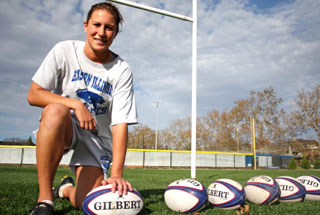 When the Tokyo Olympics get underway next week, the Eastern athletic community will once again be represented.

Former Eastern rugby player Lauren Doyle will be traveling to Tokyo to compete in her second-straight Olympics. She played for the Panthers from 2009 to 2012 and was selected for the Olympic team during her senior season. The Eastern rugby program last played in 2014 before being shut down.

But this year will be very different from Doyle’s previous experience at the 2016 Olympics in Rio de Janeiro with COVID-19 lockdowns to be in place in Tokyo throughout the games.

Doyle said that the rules that are in place for the athletes makes her feel safer about traveling despite the virus’ presence.

“We have pretty strict protocols around COVID and how we travel around,” she said. “I feel comfortable with traveling to the games.”

The team leaves for Japan on Tuesday, 10 days before the games officially begin.

The restrictions that will be in place in Tokyo mean that no spectators will be allowed for any of the events, but Doyle said that she does not think that will make too much a difference considering how things have been for the last year and a half.

“As for no spectators, I feel like we’ve been prepping for that this whole buildup,” Doyle said. “We’ve had tournaments and no spectators were allowed earlier this year. So I don’t think having no spectators is a huge hit for us. It can keep you quite grounded and focused without that added extra noise, even though it is really cool to hear the stadium erupt.”

One of the biggest changes, Doyle said, is that the athletes will be unable to attend other events as in previous Olympics.

“We’re not going to be able to go and see other sports live, so that’s going to be a big difference. I went and saw a basketball game last time and watched the men’s 100-meter sprints,” she said. “We’re just going to pretty much be in the village and that’s about it, and traveling to and from training grounds and the competition grounds.”

Looking back to when COVID first hit last March, Doyle said that the team was forced to go remote for about five months. They have been able to train in person, although at times in smaller groups, for the last 10 or so months, so she said that the team is physically ready to play.

She said the biggest challenge has perhaps been that the team has been unable to play against the top-level competition from across the world in quite a while.

“That’s kind of been the worst part about it, not getting to consistently see New Zealand, Australia, Canada, just the higher level of competition,” she said.

Another difference between the Tokyo games and the one in Rio is Doyle’s role on the team. She has now been with the team for nearly nine years, and has seen her role change as she matures as a player.

“Just having been around for so long, I carry myself to be a little more calm and composed and stuff like that, and I think that’s what a lot of people look to me for is a sense of calmness on the field,” she said. “I am in much more of a leadership role now. The younger players ask me questions. The experienced players, we all chat about strategies and whatnot. So that’s the biggest difference. “

Heading into the games, Doyle said she believes that this team has a strong chance to find success.

“I would say that this team that’s going has been training and competing together for a solid almost three years, and I think that can potentially give us a very big edge chemistry wise.”

The U.S. women’s rugby sevens team will be playing in Pool C along with Australia, China and host Japan. Play is scheduled to begin July 29 with the gold medal match to be played on July 31.