Sister Cindy is TikTok famous, but Eastern knew her before 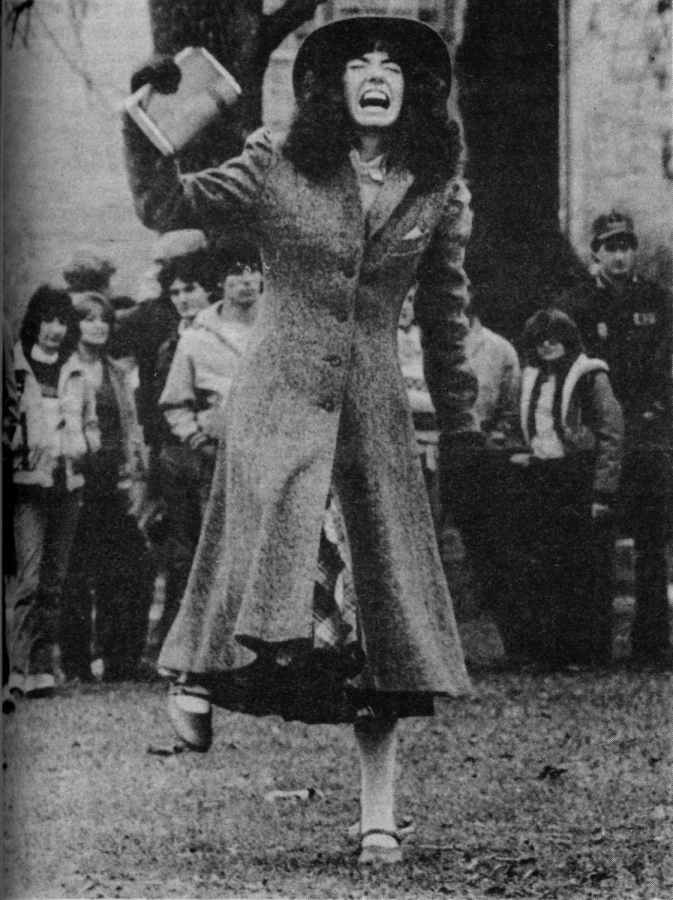 Students at Eastern know Brother Jed Smock and his wife, Sister Cindy Smock, as campus preachers who make yearly appearances to spread their beliefs and converse with students, but Cindy has found recent, unexpected fame on the popular social media app TikTok.

It all began when students at colleges where the Smocks visited started uploading clips of their interactions with the pair onto TikTok, earning thousands of likes as commentors discussed the dramatic preaching style that Sister Cindy usually employs.

Sister Cindy took advantage of this attention by creating her own TikTok account and promoting her other social media to the students who now turn out in droves to witness her show.

The Daily Eastern News’ searchable database, which is in Eastern’s repository, the Keep, has over forty years’ worth of columns, articles and photos of the couple before they gained this popularity.

The earliest mention of Brother Jed visiting campus that came up in searches is in a letter to the editor published on May 1, 1978. The letter was submitted by Ruth Moore, a resident of Ford Hall, who had complaints about noise in the Library Quad which interrupted her sleep and study times; an editor’s note says that the letter was also signed by 60 other students.

“Perhaps the worst offender is the infamous Jed Smock, who always has to preach outside of Ford Hall,” Moore wrote. “Only once has he been moved and that was under threat of arrest by security police.”

While database searches did not reveal any earlier articles from the News about the Smocks, Moore’s statements imply that Jed had already visited campus several times by ’78.

There were a few columns published in 1980 imploring students to ignore Brother Jed and stop giving him attention, but the earliest news article that appeared in searches was published May 1, 1981. It includes what appears to be the first mention of Sister Cindy before she married Jed.

“Brother Jed, along with colleagues Max Lynch, Cindy Lasseter and Greg Hall, told students that ‘they were on the road to destruction along with their professors’ and if they did not repent they were going to ‘burn in the depths of hell,’” reporter Dan Crews wrote.

All four of those people are members of an organization Brother Jed created called Campus Ministry USA.

The article includes mention of students calling the preaching “the best entertainment Eastern has had all semester,” despite (or maybe because of) Brother Jed’s claims that rock and roll artists would be going to hell for their music style.

The next article covering the pair was published September 2, 1982. At this point, they were advertising themselves as a “reformed hippie and ‘Disco Queen.’”

The article, which was written by Becky Lawson, appears to have been an attempt to learn more about the preachers’ personal lives. It mainly includes Brother Jed’s opinions on pop culture, fashion, and Greek Life, but mentions that Cindy said she and Jed were “just friends” at that point.

The article ends by saying that “Smock and Lasseter said they receive private funding from churches, Christian business groups and individuals,” which answers many peoples’ questions about how the couple have been able to keep preaching for so long.

Campus Ministry USA visited campus at least once in 1983- a feature photo of Brother Max was published on August 30- but it appears that the News did not publish any articles about them that year.

The group visited the next year, too. An article published on August 31, 1984, focused on Brother Jim, a new member of Campus Ministry USA, but it does mention that Jed and Cindy had gotten married at some point.

On September 10 of the same year, the News featured a full page called “Holy War!” that included articles titled “Crusaders square off” and “Evangelists call each other ‘sinners’ as holy words become fighting words.”

Students seemed to prefer listening to the Woroniecki’s messages. Campus Ministry USA members said that Mike Woroniecki had interrupted their preaching on other campuses. The tension turned to conflict as the two groups argued, and then even had a brief physical altercation.

It appears that the News did not publish any original articles about Brother Jed and Sister Cindy for a few years after that, though the national news page did feature a story about Brother Jed from the Associated Press on August 29, 1986.

On August 27, 1990, the News published an article covering another visit from Campus Ministry USA. This visit seemed relatively uneventful; the preachers spoke and students responded with mockery, but there weren’t any physical fights or other notable issues.

After that, there’s a larger gap in news coverage of Brother Jed and Sister Cindy. It’s hard to tell whether the archive search experienced some kind of errors during this time or whether editors at the News just chose to stop covering the evangelists’ visits, but the next available article is from August 19, 2013.

On that visit, students seemed upset that the ministry was allowed to speak at Eastern at all.

A student named Taylor Bainter started a petition for the university to stop allowing Campus Ministry USA to be at Eastern.

“’It’s not the actual message, but how it’s being said,’ Bainter said. ‘It’s on our campus, and they’re guests. We want to take back our campus.’”

Eastern continues to allow Jed, Cindy, and others like them to speak on campus grounds because Eastern is a publicly funded university. Most campus grounds are considered public property, so the First Amendment protects speech in those areas.

Coverage from the News in 2014 doesn’t seem to include anything about Brother Jed and Sister Cindy themselves visiting campus, but Angela Cummings, another Campus Ministry USA member, did make an appearance.

Brother Jed and Sister Cindy did visit in 2013: they came to Eastern in the spring and fall semesters that year.

The News published articles about them on April 16 and August 27, covering their visits as usual, which were again, relatively uneventful.

In 2020, which was of course during the COVID-19 pandemic, university president David Glassman did comment that he was concerned that students were not following social distancing guidelines while responding to Brother Jed and Sister Cindy, but mask rules were still enforced.

Sister Cindy started receiving attention on TikTok toward the end of 2020 through the 2021 spring semester, and the group has not been at Eastern since that development.

Videos on that app under the #sistercindy tag have millions of views and likes. Cindy’s account, @sistercindyforreal, has over 350,000 followers.

Tori Coffman, an Eastern alumna who has had personal interactions with Brother Jed and Sister Cindy, said that it is best for people to block Cindy and ignore her.

“There are a lot of really impressionable teens and young adults on TikTok, people who are still learning how they view the world,” Coffman said. “Having the type of rhetoric they spread put out on social media in bite-sized videos doesn’t bode well for those who might become indoctrinated to such toxic beliefs.”

Coffman said that she actually visited the Smocks’ home in 2015 with her boyfriend of the time.

“While we were there, Cindy took me aside and Jed took my boyfriend aside. They talked to each of us separately about our relationship, trying to find holes they could dig at,” Coffman said. “I think it was an attempt at manipulating us, but unfortunately for them we knew what we were walking into.”

Jessica Quicksall, another Eastern alumna, interacted with Sister Cindy while on campus.

“One time while I was walking to class, Sister Cindy was there doing her usual screaming at people that they’re going to hell. I think she was talking about modesty,” Quicksall said. “I was wearing a short-sleeved shirt and a knee length skirt that day and doing my best to ignore her as I walked towards Coleman. She pointed me out and said, ‘Now she’s dressed appropriately.’ And I, not one to ever want to be a part of her shenanigans, said, ‘you call this modest?’ and then proceeded to flash the crowd or people around her. Then she told me I was going to hell and I went to class.”

Quicksall said that the attention Sister Cindy is getting online is ridiculous.

“She’s changed her story just so that people will like her and those on TikTok don’t even know the hate that she spewed. I commented on one of her videos and got like 500+ likes telling everyone what a fraud she is,” Quicksall said. “Any attention to the hate she speaks fuels her ego. I’m glad it’s negative attention, but I wish it were no attention at all.”

Luke Taylor can be reached at [email protected]