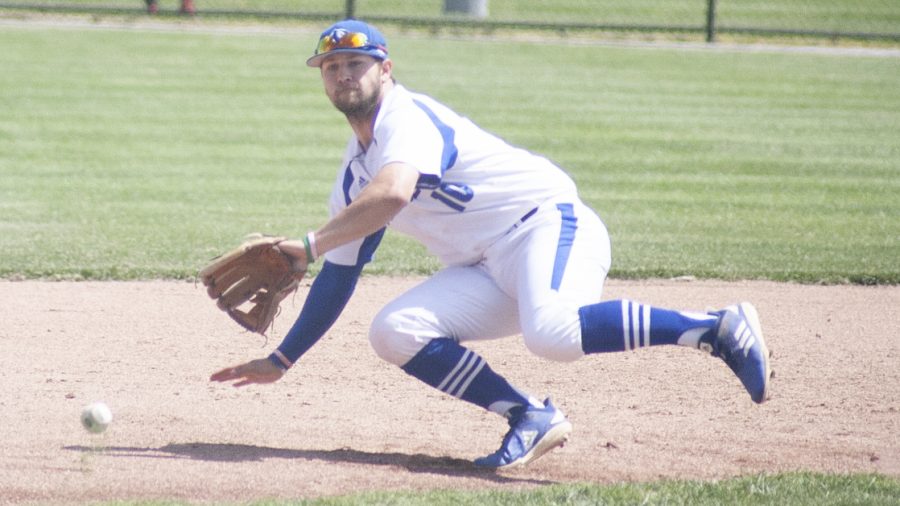 Eastern third baseman Dalton Doyle dives to his right to make a play on a ground ball, which he would then throw to first base for an out against Tennessee-Martin on April 22 at Coaches Stadium. The Panthers lost the game 5-1.

There were plenty of solo home runs hits between the Eastern baseball team and Tennessee-Martin Thursday afternoon.

All six runs in the game came from solo shots, five of which belonged to the Skyhawks in a 5-1 home loss for Eastern.

The Panthers fell to 8-11 in conference play this season with the loss. The Skyhawks improved to 6-7 and passed Eastern for eighth place in the OVC standings with the win.

It was just the third time this season the Panthers were held to one run.

Both teams had their aces on the mound, with Cameron Doherty starting for the Panthers and Winston Cannon going for the Skyhawks.

He got run support in the bottom of the fifth when DH Tarron Lawson took Cannon deep to left-center field for his first home run of the season.

After giving up a double in the third inning, Doherty would retire the next 10 batters he faced until Skyhawks rightfielder Wil LaFollette hit a solo home run of his own with two out in the sixth to tie the score 1-1.

The Skyhawks the led off the seventh and eighth innings with home runs off of Doherty, the first coming from first baseman Ethan Whitley and the second coming from second baseman Will Smith.

Doherty surrendered one more home run to shortstop Casey Harford with one out in the inning.

Eastern had a chance to respond in the bottom of the eighth inning when leftfielder Ben Snapp hit a leadoff double, but the Panthers were unable to capitalize.

Hayden Birdsong replaced Doherty to pitch the ninth, allowing a leadoff home run for the third-straight inning, once again coming off the bat of Whitley.

Birdsong walked the next batter, promptly picked him off and retired the next two batters. He was helped on the final out by a barehanded play from third baseman Dalton Doyle, who also made a diving play earlier in the game.

Cannon pitched into the ninth, which Eastern led off with a double from shortstop Trey Sweeney, and after a one-out walk to first baseman Christian Pena, Cannon was pulled for David Hussey.

Hussey struck out Doyle and got Lawson to fly out to right to end the game.

Lawson was 1-for-4 with the home run and Sweeney was 2-for-3 with a double and a walk to lead Eastern offensively.

Whitely was 3-for-4 for the Skyhawks with the pair of solo home runs.

Doherty gave up 8 hits in 8 innings with 4 runs allowed. He had two strikeouts and no walks.

Cannon went 8.1 innings, allowing one run on 5 hits with 6 strikeouts.

The Panthers and Skyhawks will conclude their three-game series with a Friday doubleheader. The games will start at 11 a.m. and 2:30 p.m.