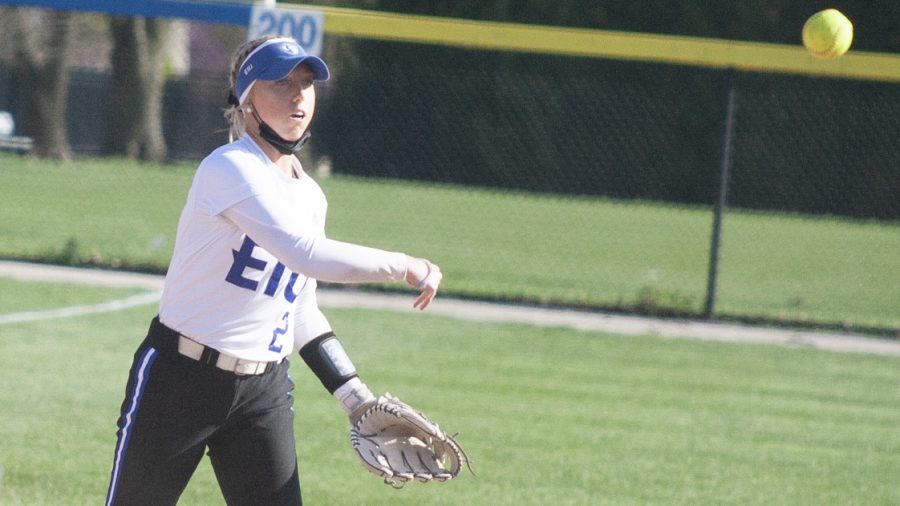 Eastern redshirt-junior Megan Burton throws to first after fielding a ground ball at third base in the second game of a doubleheader against Tennessee-Martin April 12. Eastern lost the game 1-0.

The Eastern softball team used some late-inning heroics to win the first game of a doubleheader 9-7 Monday against Tennessee-Martin but were shut down on offense in the second game, losing 1-0 and earning a split against the Skyhawks.

The Panthers are now 11-7 in conference play this season and are in fourth place in the standings.

The Skyhawks now have a conference record of 9-8 and are in seventh place.

The Skyhawks extended their lead to 4-1 with a run-scoring single in the top of the fifth.

Eastern responded in the bottom of the inning, scoring on a fielder’s choice from redshirt-sophomore Katie Nicholson before a 2-run single by redshirt-freshman catcher Amber Cieplinski tied the score 4-4.

Tennessee-Martin pulled ahead once again in the sixth, scoring two runs on a single from sophomore first baseman Kaitlyn Kelley.

The back-and-forth nature of the game continued in the bottom of the sixth when three-straight singles with one out loaded the bases for Mitchell.

She drove in a run with a single before second baseman Hannah Cravens stepped up to hit a grand slam that put the Panthers up 9-6.

The Skyhawks would score another run in the seventh but that was all and the Panthers held on for the win.

Freshman Olivia Price pitched six innings and was credited with the win while redshirt-senior Jade Montgomery earned the save.

The second game saw a sharp decrease in scoring for both teams, with the Skyhawks scoring the lone run on a double in the second inning.

Montgomery got the start for Eastern, pitching all seven innings while allowing just the one run on six hits. She also struck out seven batters.

The Panthers’ best scoring chance came in the second inning when Nicholson to lead off the inning, advanced to second on a ground out with one out and then stole third, but she was stranded 60 feet away.

Eastern will play again April 17 and 18 on the road against Jacksonville State.