Panther offense breaks out in 3-2 win 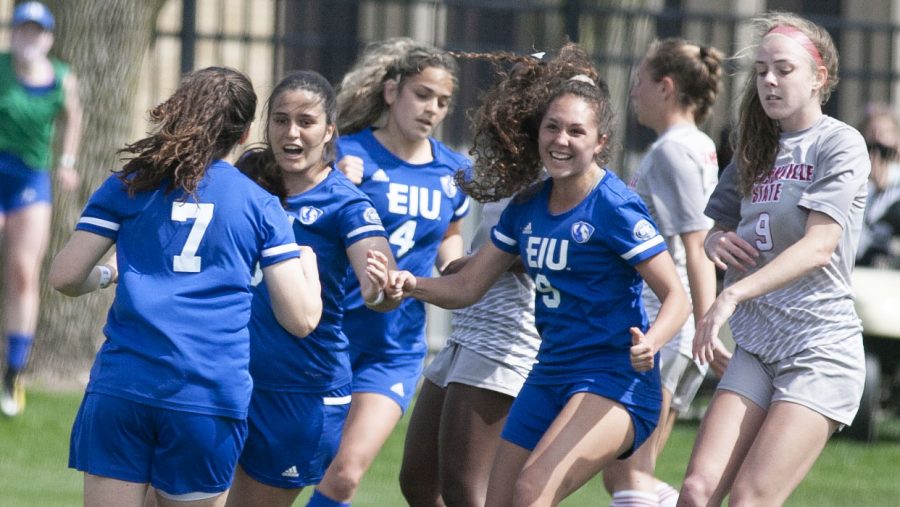 Members of the Eastern women's soccer team celebrate a penalty kick goal by senior forward Itxaso Aguero (7) that put Eastern up 1-0 against Jacksonville State on March 30 at Lakeside Field. Aguero would add another goal later on and the Panthers beat the Gamecocks 3-2.

An offensive breakthrough of sorts took place for the Eastern women’s soccer team in its final home match against Jacksonville State Tuesday afternoon.

After scoring just two goals in the first eight matches of the season combined, the Panthers hit the back of the net three times against the Gamecocks, winning the match 3-2 for their second victory of the season.

Eastern improved to 2-6-1 with the win while Jacksonville State fell to 3-4-1.

Prior to the three-goal output Tuesday, the Panthers had scored one goal in their second match of the season before being shutout in the next five. They then played Austin Peay to a 1-1 tie March 26.

Eastern head coach Jake Plant said that he was happy for the team to get the win in the manner they did.

The Panthers jumped ahead to a 2-0 lead early, scoring as many goals in a span of just over a minute as they did in the first 760 minutes of the season.

Senior forward Itxaso Aguero scored the first goal on a penalty kick in the 10th minute, her first of the season.

The score remained 2-1 into halftime. Eastern was in control for much of the first half, outshooting the Gamecocks 8-3.

Jacksonville was on the attack in the second half and would outshoot Eastern 12-3 in the final 45 minutes.

The Gamecocks managed to tie the score six minutes into the second half when Pallister scored on a penalty kick of her own. It was her third goal of the season.

The Eastern defense managed to stop the Jacksonville State scoring from there and Aguero scored her second goal of the match in the 63rd minute, giving the Panthers a lead they would not relinquish.

Plant said that the offensive success could be attributed to the fact that the team continued to put in the work throughout the scoring drought and set themselves up for a breakout performance.

“We have a saying in the program, ‘If you’re hammering at a rock it’s not the last one that breaks the rock, it’s the 10,000 before it,’” he said. “Everything that it takes to score a goal we’ve worked on for weeks, so even though the product hasn’t been coming, it was nice to see it come to fruition today for sure.”

Eastern now has a full week until their season finale on the road against OVC-leading Murray State April 6 at 1 p.m.

The Racers are 7-1 this season and are also scheduled to play second-place Southeast Missouri (6-1-1) on April 2.

Plant said that the team will keep doing what they have been doing in hopes of ending the season on a high note next Tuesday.