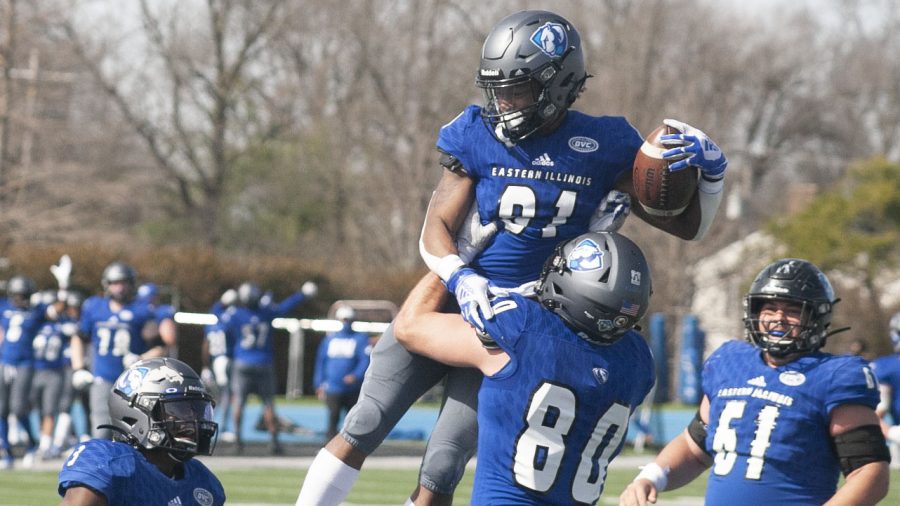 Eastern receiver Arron Foulkes is lifted up by teammate Jay Vallie as the Panthers celebrate Foulkes' second touchdown of the game Sunday against Tennessee Tech. The Panthers beat the Golden Eagles 28-20 for their first win of the season.

Special teams and defense set the tone for the Eastern football Sunday afternoon against Tennessee Tech. Eastern’s offense also came through when it needed to, and the Panthers beat the Golden Eagles 28-20 to pick up their first win of the season.

Special teams started off the scoring less than two minutes into the game when a blocked punt from DeAirious Smith was recovered by Marcus Bornslater for a touchdown.

Then the defense sealed the win on an interception from Colin Bohanek with less than two minutes remaining, the third Panther interception of the game.

Freshman quarterback Otto Kuhns threw for 2 touchdowns in his second career start and sophomore running back Jaelin Benefield ran for a touchdown as well, assuring that all three phases of the game were instrumental in the win.

It was the second win with the Panthers for head coach Adam Cushing, now in his second season leading the team.
He said that he was happy with how the entire team performed to get the win.

“Obviously an incredible team win, and that’s what stands out to me right away, without watching a lick of the video,” Cushing said. “The defense played great, put the offense in some great situations. The offense took advantage for the most part. Obviously some big time plays on special teams. Our special teams continues to step up week in and week out. Our guys are embracing those roles and then I think what was incredible was just some big plays down the stretch.”

Cushing also said that the win feels a little sweeter after the last-second loss the Panthers suffered last week against Tennessee State.

“Sometimes those type of games that are so heartbreaking can come back and beat you twice, if you hang on to that heartbreak,” he said. “So much credit to our players, to come back after that week and play the way they did today is incredible.”

Kuhns was efficient in his second start. He was 12-of-19 passing for 153 yards and 2 touchdowns. He did throw an interception, but it was on the final play of the game when he threw the ball away to run out the clock.

Benefield ran the ball 11 times for 50 yards to lead all players in rushing.

In addition to Kuhns and Benefield, the Panther offense had other players step up and make an impact.

Super back Jay Vallie had 5 catches for 66 yards to record his second productive game in a row.

Freshman wide receiver Arron Foulkes had 3 catches for 60 yards and 2 touchdowns, his first two of the season.

Cushing said that Foulkes’ approach during practices and the offseason is what led to his success Sunday.

Defensively, the Panthers were led once again by sophomore linebacker Jason Johnson. He set a new career-high with 15 total tackles, including 2 tackles for loss and a sack. Johnson now leads the OVC in conference play this season with 44 total tackles.

“He is a guy who is going to be the most physical guy on the field. That’s just how he plays,” Cushing said. “Because he dedicates so much time to his preparation, he watches so much video, he’s one of those guys who shows up to practice every single day and if you that somebody on the field practices harder than him I’d tell you you were lying. He puts himself in position to make those plays, and certainly, because he does all that, then on Sundays this spring he certainly has looked pretty unblockable.”

In addition to his game-sealing interception, Bohanek had 8 tackles and teamed up with freshman safety Kaelin Drakeford on a sack.

Senior defensive back Mark Williams and sophomore linebacker Anthony Shockey had interceptions, returning them for 25 yards and 47 yards respectively.

Coming into the game, the Panthers has just a one interception and one sack this season.

Junior quarterback Bailey Fisher returned for the Golden Eagles, playing for the first time this season. He was 22-of-37 passing for 230 yards and a touchdown with the 3 interceptions.

Junior running back Kurt Taylor Jr. was Tennessee Tech’s leading rusher in the game, carrying the ball 12 times for 80 yards. The Golden Eagles were held to just 80 rushing yards as a team.

Eastern will be on the road for its next game March 28 against Murray State.

The Racers are 4-0 this season and are tied atop the OVC standings with Jacksonville State.