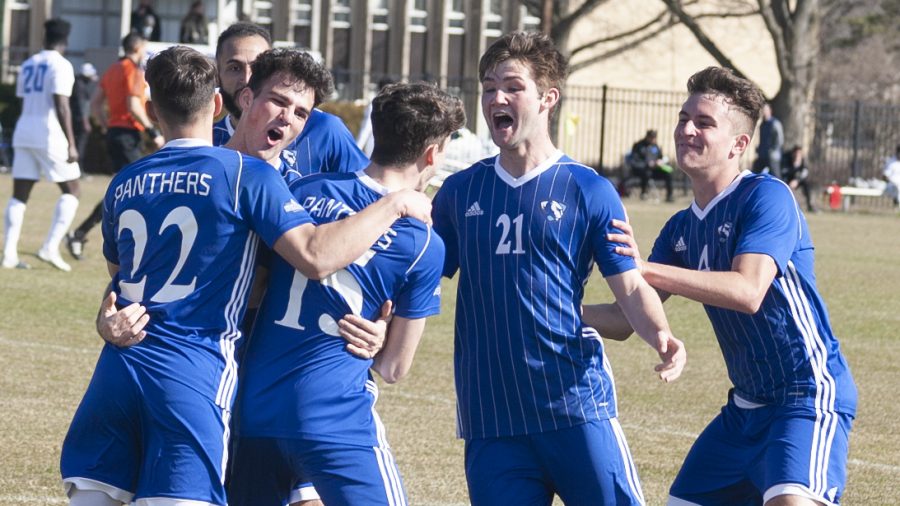 The Eastern men's soccer team celebrates a goal from forward Maxwell Allen (15) in the Panthers' 2-2 tie against Kansas City March 6.

The Eastern men’s soccer team picked up its second tie of the season Saturday against Kansas City with the match ending with a score of 2-2.

It was the second home match of the season for Eastern and also marked the halfway point for the conference season.

Eastern goalkeeper Jonathan Burke continued his busy start to the season, recording 8 saves to increase his conference-leading total to 37 saves this season.

Burke also ranks second in the conference in save percentage at .804.

He was unable to stop a shot from Kansas City’s Jony Muñoz in the 20th minute that put the Roos up 1-0.

The Panthers would tie the score 12 minutes later when senior forward Shady Omar headed in a goal off a corner kick for his second goal of the season, tying him for the team lead with redshirt-junior forward Reed Axthelm.

The assist on Omar’s goal came from redshirt-sophomore Munir Sherali, his first of the season.

The score remained 1-1 for the remainder of the first half and well into second before Eastern claimed a brief lead.

Sophomore forward Maxwell Allen netted his first goal of the season in the 67th minute to put the Panthers 2-1.

The lead disappeared almost immediately. After the Roos took possession after Allen’s goal, the advanced right down the field and Muñoz got another shot behind Burke for his second goal of the match.

The two teams combined for 9 shots in the overtime periods, but despite a few close calls, neither team was able to pick up the win.

Eastern will be back on the road for their next two matches on Thursday and Saturday against Omaha.