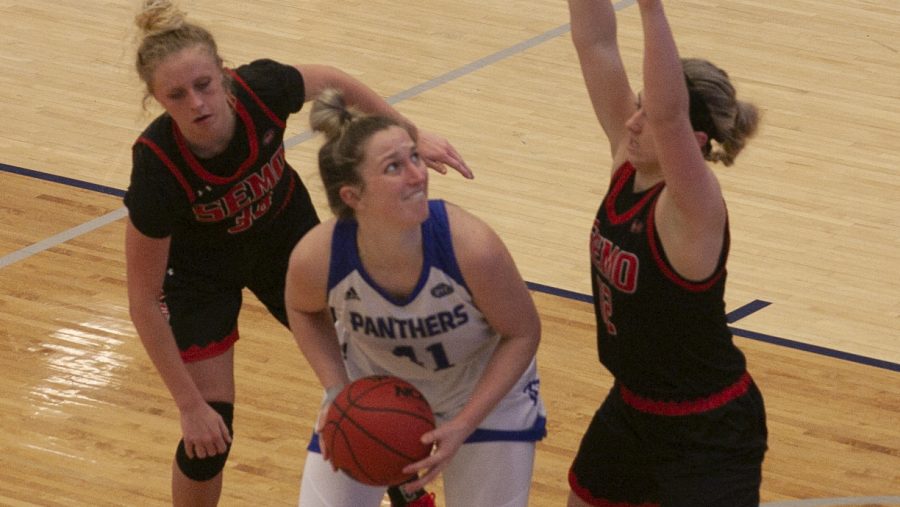 Eastern forward Abby Wahl battles with two opponents in below the basket in a game against Southeast Missouri Feb. 25 in Lantz Arena. Wahl had 10 points and 7 rebounds in the game, which Eastern won 65-57.

For the second-straight season, the Eastern women’s basketball team was knocked out of the OVC tournament by Tennessee-Martin.

Last season, the Panthers fell in the quarterfinals. This season, it was a 65-56 loss in the tournament’s opening round Wednesday afternoon in Evansville that ended the Panthers’ season.

The game was close through the first half, but Tennessee-Martin pulled ahead in the third quarter and held on late for the nine-point win.

It was the second-straight game between the two teams, as they closed out the regular season against each other on Feb. 27 with the Skyhawks winning 69-63.

Head coach Matt Bollant, in his fourth season with Eastern and his second-straight OVC Tournament, said that the Skyhawks earned the win, playing well even though they were missing OVC Player of the Year Chelsey Perry once again, who was missing her fourth-straight game with injury.

“Give Tennessee-Martin credit,” he said. “They’re the number one seed for a reason, and for them to play that well without Perry, they did that throughout the year. Perry did not play a lot down the stretch, and they defended and fought and found ways to win.”

Tennessee-Martin head coach Kevin McMillan, who was named the OVC Coach of the Year Tuesday, said that this matchup was not a normal first-round matchup.

“That wasn’t a typical one-eight game, which we knew it wouldn’t be,” he said. “I’m impressed with our kids for figuring out a way to take care of their business today. That was a hard-fought game.”

The Skyhawks jumped ahead early without Perry, leading the Panthers 22-14 after the first quarter. The Panthers responded in the second, outscoring Tennessee-Martin 19-15 and trailing 37-33 at halftime.

Junior forward Abby Wahl led the Panthers with 15 points and 6 rebounds at the half, and sophomore guard Lariah Washington added 9 points.

For the Skyhawks, sophomore forward Dasia Young led all players with 18 points at halftime while shooting 10-12 from the free-throw line.

In the opening minutes of the third quarter, the Panthers kept chipping away at the Skyhawk’s lead, cutting it to 42-40 before Tennessee-Martin pulled away for good.

The Skyhawks went on a 14-3 run to close out the quarter, and despite scoring just 9 points in the fourth, were able to hold on for the win.

Eastern shot 23-of-62 in the game while the Skyhawks shot 19-43. The biggest advantage for Tennessee-Martin came at the free-throw line, where they shot 21-of-23 compared to Eastern’s 6-of-8.

The Panthers forced more turnovers than the Skyhawks and outscored them 34-20 in the paint, but Eastern was only able to lead the game for 2 minutes, 49 seconds in total.

Wahl finished with a team-high 21 points and 9 rebounds. Washington went scoreless in the second half while senior guard Karle Pace scored 8 in the half to finish second on the team with 12 points.

Young continued to effectively fill the void left by Perry, leading all scorers with 24 points and tied a Skyhawk record by making 16 free throws in the game. In the matchup with Eastern on Feb. 27, she scored 30 points to lead all scorers.

Bollant said that the team had hoped to limit Young offensively but were unable to do so.

“Give Young credit. We were pretty determined coming in to be different than Saturday, and honestly it wasn’t a whole lot different,” he said. “As a coaching staff, we just didn’t do a good enough job of keeping the ball out of her hands.”

Wahl said she was happy with how the team competed throughout the game, even though the end result was not what they wanted.

“I think we fought hard to the end, that’s the most important part,” she said. “Our heart was there, we fought, we wanted to get it done for our seniors, but we just fell short. But I’m proud of our team and the way we stayed together.”

The loss not only ended the season, but also the Eastern careers for the team’s three seniors: Pace, Taylor Steele and Grace McRae.

Wahl said that these players made a solid impact on her and on the program as a whole.

“Karle is just such a good leader for us. Everyone looks to her for confidence, for energy. She brings it all. We’re really going to miss her,” Wahl said. “Taylor is just so smart. She’s definitely the consistent one. We look for her when we need to take a deep breath, she’s got us. And G-mac has always helped me in the post. She’s so strong and she definitely pushes me and makes me better. All three of them have made such a big impact and we’re really going to miss that.”

For Bollant, this year’s senior class were his first freshman class he recruited. He said that they were instrumental in resetting the program’s culture on and off the court over the last four years.

“When I first got the job… there was only 10 kids on the roster and we needed to add some depth. Thankfully one of my good friends, John Wild out in Tennessee, said ‘Hey, this Karle Pace is really good and she doesn’t have any offers,’” Bollant said. “When we got (to Eastern), arguably we were one of the worst programs in the country in our first year, and in the past they had been. So it takes a lot to change a culture. There’s a lot of coaches who do the right thing and never get it changes, so I’m really thankful for our three seniors.”

Pace ends her career with 1,373 points, the 12th-most in program history.

Tennessee-Martin will continue their run Friday when they play the winner of the game between Jacksonville State and Tennessee Tech, which will be played Thursday.