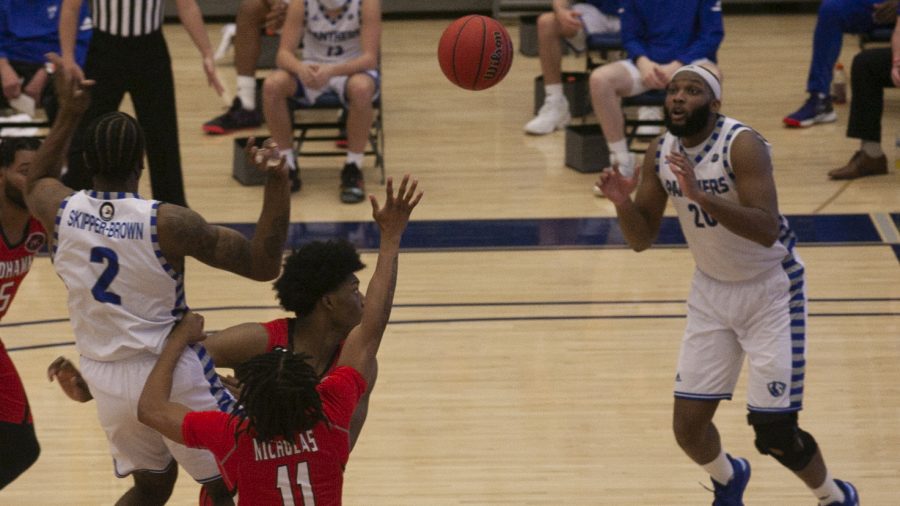 The Eastern men’s basketball team was in control of their own tournament destiny entering the game Thursday at home.

With wins against Southeast Missouri Thursday and Tennessee-Martin Saturday, they would have punched their ticket to Evansville and the OVC Tournament.

Instead, the Panthers lost a shootout to the Redhawks Thursday, losing 94-88 and missing the postseason.

In a season where the Panthers dealt with injuries, had multiple players miss time due to COVID-19 protocols and had several games where only seven or eight players were available, they were in the tournament picture until the final two games of the season.

Eastern head coach Jay Spoonhour said he was proud of his team for getting that far in such an unusual season.

“We did a good job to get us to this point,” he said. “We had put ourselves in position where if we would’ve won the remaining two games, we would’ve gotten into the tournament, and that would’ve been a heck of an accomplishment.”

Eastern is now 6-13 in conference play this season.

This game was much closer than the last time these two teams met back on Jan. 30 when the Redhawks won 75-44.

Three of Eastern’s top four scorers Thursday were not available in that previous matchup, and with this added depth, the Panthers were able to lead for most of the game.

Their lead hovered around five points for much of the second half, before Southeast Missouri took a 71-70 lead with 5 minutes, 28 seconds left in the game, their first since leading 30-28.

The Redhawks converted their late free throws to extend their lead to as much as 9 points before getting the 6-point win.

“They just beat us. They played better than we did, so they deserved to win,” Spoonhour said. “Our guys fought, fought hard the whole time, we just didn’t get enough defensive stops.”

Eastern was led offensively Mack Smith with 22 points on 5-of-10 shooting from three-point range.

Also scoring in double figures were Jordan Skipper-Brown with 20 points, Marvin Johnson with 17 and Sammy Friday IV with 15.

Southeast Missouri’s Eric Reed Jr. led all players with a season-high 27 points while shooting 7-of-9 from three.

The Panthers have one game left on the schedule at home against Tennessee-Martin Saturday.

The game is scheduled to tip off at 4 p.m.