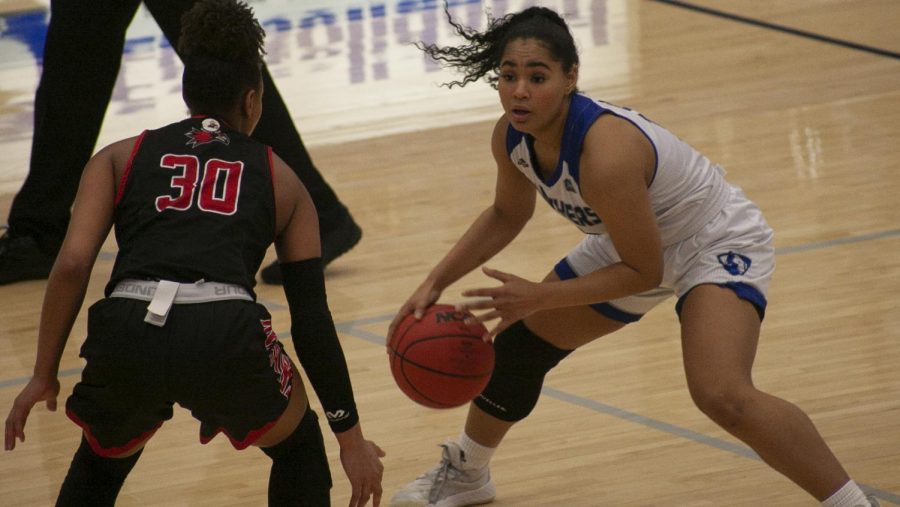 Eastern guard Karle Pace surveys the Panther offense against Southeast Missouri Feb. 25 in Lantz Arena. Pace scored 9 points and recorded 7 rebounds in the game, which the Panthers won 65-57 to clinch a spot in the OVC Tournament.

With a home win against Southeast Missouri Thursday, the Eastern women’s basketball team clinched a spot in the OVC Tournament for the second-straight season. They will be the eighth seed this season after finishing fourth last season.

The Panthers overcame a slow start in the first half to beat the Redhawks 65-57, sweeping the season series against Southeast Missouri as well. Eastern is now 9-10 in conference play.

Eastern head coach Matt Bollant, in his fourth season as the Panthers’ head coach, said he was proud to see the team in the postseason for the second time in as many years.

“We dug ourselves a hole starting 1-4 in the conference, and then really having our tough schedule down the road, so I’m proud of our players,” he said. “We had to get some tough road wins, at SEMO and at Austin Peay were big, and just now to be back healthy I feel like we’re playing better and getting everybody back.”

The Panthers also dug themselves a bit of a hole to open the game Thursday, falling behind 9-0 to the Redhawks in the first three minutes of the game despite Southeast Missouri’s leading scorer, senior guard Tesia Thompson, being out for the game.

Eastern would outscore Southeast Missouri 6-2 in the remainder of the quarter and were then outscored 14-13 in the second.

But after scoring just 19 first-half points, the Panthers exploded in the third quarter, outscoring the Redhawks 28-12.

The Panthers shot 11-of-18 from the field in the third quarter and forced 9 turnovers while only committing 2 of their own. Eastern scored 24 points off those turnovers.

“We kept talking about enthusiasm and energy, just do those things and don’t get caught up in the end result. And I think at the start of the game, we were worried about the end result,” Bollant said. “Give SEMO credit, they kind of threw the first punch, but I thought for the rest of the half we fought. We didn’t make shots, but we fought.”

He said that during halftime, he told the team points would come if the team kept competing like they did for much of the first half.

“I said ‘Just keep fighting like that. The shots will fall and we’ll be fine,’” he said. “And then thankfully in the third quarter we scored 28 points and started to get the shots to fall.”

Leading the way in the third quarter for the Panthers was sophomore guard Lariah Washington, who scored 14 of her game-high 24 points in the penultimate quarter.

The only other Eastern player to score in double figures was junior forward Abby Wahl with 10 points. She also tied for the team lead with 7 rebounds. Washington also had 7 rebounds in the game.

Junior guard Kira Arthofer filled up the stat sheet for Eastern, recording 6 points and 3 rebounds while leading the team with 4 steals and 7 assists.

In Thompson’s absence, redshirt-junior guard Terri Smith led the Redhawks with a career-high 17 points, shooting 5-of-6 from three-point range.

Eastern has one game left in the regular season, which will be Saturday against OVC-leading Tennessee-Martin. The Skyhawks are 16-2 in conference play this season and will also be Eastern’s opponent in the first round of the tournament next week.

“We talked a little bit ahead of time already, what things we want to show or do not want to show. We’re going to start our seniors (Pace, Taylor Steele and Grace McRae) and hopefully they’ll get us off to great start,” Bollant said. “Obviously you’re playing to win the game, but at the same time, you probably want to not show everything.”

The game will tip off at 1 p.m. in Lantz Arena.