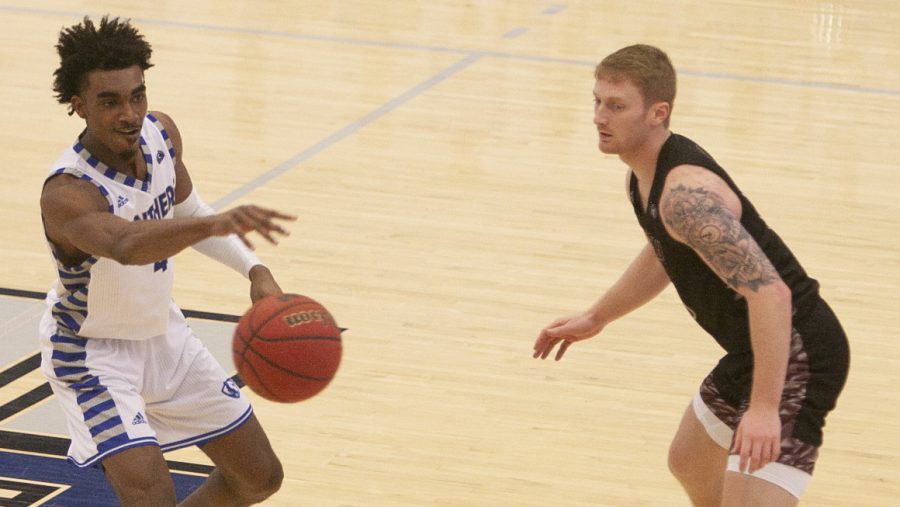 Eastern guard Marvin Johnson throws a pass toward the sideline in a game against Eastern Kentucky in Lantz Arena Jan. 16. Johnson scored 20 points and the Panthers lost 93-85 in overtime.

The Eastern men’s basketball team met the top team in the OVC Thursday night when they played on the road against Belmont.

For much of the game, it appeared that Eastern was in position to pick up an upset win, but Belmont pulled away in the second half to earn the 79-66 win and improve to 9-0 in OVC play this season.

The Panthers fall to 2-5 in conference competition this season with the loss, their fourth in a row.

The game was a back-and-forth affair for the first 28 minutes, which included six ties and nine lead changes.

The Bruins outscored Eastern 23-6 over the next 6 minutes, at one point making 10 consecutive shots, and eventually winning by 13 points.

The win was Belmont’s 12th in a row overall this season and its 21st straight conference win dating back to last season.

It also extended the Bruins’ winning streak over the Panthers to eight games.

Eastern’s offense played rather efficiently, shooting 43.3 percent from the field for the game and 48.3 percent in the second half.

But Belmont’s offense shot over 50 percent for the game and went 21-of-32 from the field in the second half, good for a shooting percentage of 65.6 percent.

Eastern did enjoy a sizeable rebound margin at 42-26, but this advantage was negated by 20 Panther turnovers which led to 23 points for Belmont.

A couple of bright spots for the Panthers were the performances of Sammy Friday IV and Marvin Johnson.

Friday got the Panthers ahead early in the game and scored 12 points in the first half. He finished the game with 20 points on 9-of-12 shooting and collected 10 rebounds, picking up his second double-double of the season.

Johnson continued a productive stretch of games by earning his third double-double of the season with 14 points and 10 rebounds.

Josiah Wallace returned for the Panthers after missing the last two games and scored 10 points in 27 minutes.

Belmont was led in scoring by JaCobi Wood with 17 points. Wood led the Bruins through their run in the second half as well. Luke Smith and Nick Muszynski also scored in double figures, scoring 12 and 10 points respectively.

Eastern plays again on Saturday when they face Tennessee State on the road. The game is scheduled to tip off at 4 p.m.