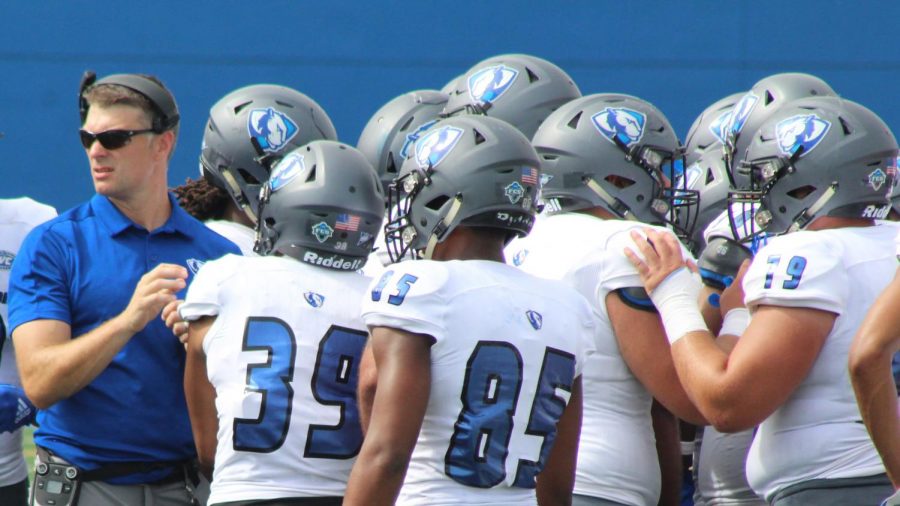 Eastern head football coach Adam Cushing addresses the team during a timeout in a game against Indiana State in September 2019. Cushing spoke with the media Tuesday as preparations for the upcoming season get underway.

With the COVID-altered 2021 football season set to begin in just over a month, the OVC held a media day for its teams Tuesday.

Eastern head coach Adam Cushing and senior quarterback Harry Woodbery spoke via Zoom during Eastern’s time slot in the event, and Cushing talked about how the team is getting ready for the season.

“I’m just sitting her incredibly proud of the response of our football program,” Cushing said. “Our staff and players embraced the mantra that we all kind of came to together of ‘What does this make possible?’ We were just finding ways to turn some of the challenges into opportunities just by stretching our daily best.”

One of the challenges that COVID-19 has presented for the Eastern football team is how to integrate incoming freshmen into the program.

Cushing said that the lack of football in the first semester of their college experience is something that is difficult to deal with.

“That I think was their biggest challenge,” he said. “That thing that they always relied on to create that structure in their life, to help keep them focused, just wasn’t there.”

He said that the job of him and his staff then became providing structure in the absence of a football season.

“That was our responsibility as a staff and as a program, the players helping each other out, was just creating that structure and making sure that we put everything in place that is just natural,” Cushing said. “The motivation is naturally there when you have a football season, to be completely structured, to have your time managed, all those little details.”

Another factor of this season is that games will be played on Sundays instead of Saturdays, and with the Power Five conferences having already played their seasons, more eyes could be on conference like the OVC.

“I think that’s it’s going to be really, really fun to have a national captive audience this spring watching our conference compete, because there’s going to be a lot of eyes opened. I really believe that, both from the EIU Panthers, but everybody around our conference, to see what level of football we play around here,” Cushing said.

He also said that the season will be dedicated to the memory of former Director of Football Performance Joe Orozco, who died unexpectedly in November at the age of 30.

“We love him and miss him greatly every day, and our team is going to play this football season in honor of the passion and purpose that he brought every single day of his life,” Cushing said.