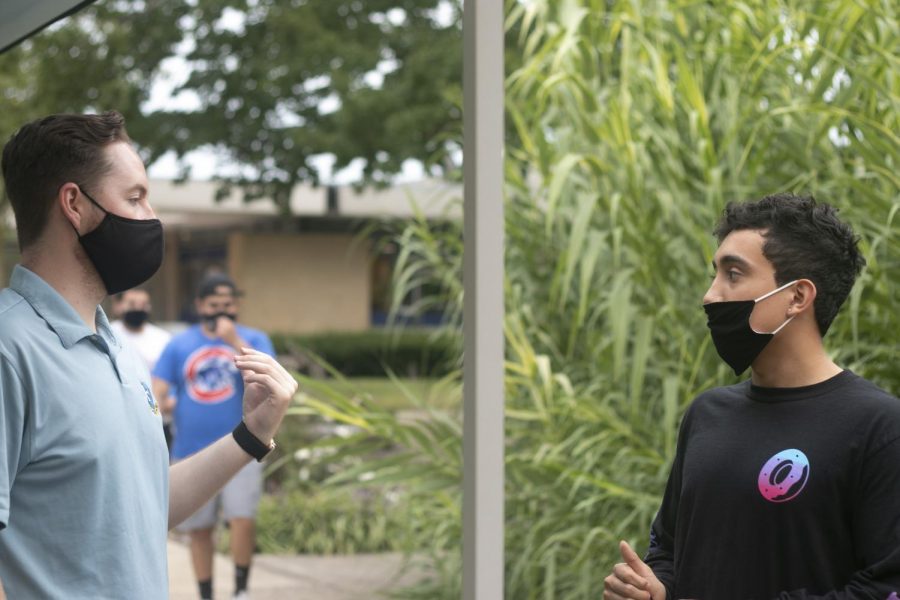 Armando Jimenez, a freshman marketing major, talks to a Sigma Chi recruiter during ‘Meet the Fraternities’ Wednesday evening. Jimenez is “checking out the fraternities” and “which one catches my eye” during the event.

The Interfraternity Council hosted an event Wednesday night to allow fraternities to recruit new members to their brotherhoods.

The fraternities gathered around the South Quad in socially distanced setups to try and find individuals on campus that were interested in their respective groups.

Dipo Ojo, senior marketing major and member of Sigma Pi, said he was optimistic about this semester’s recruitment process.

“We’re recruiting hard, we’ve been on it this semester so far, even the summer too, so yeah it’s looking like a pretty good turnout,” Ojo said.

Ojo added that as a member of the oldest fraternity on Eastern’s campus he would like to see the community as a whole prosper.

“We’re one of the oldest frats on campus, we’re just trying to have a good community of guys,” Ojo said.

Allen Proctor, Resident Expansion Coordinator for Sigma Chi Fraternity, was enthusiastic about his fraternity’s fresh start after the chapter was suspended in 2017 and is now allowed to return to Eastern’s campus.

“We are coming in, essentially brand new,” Proctor said.

Proctor also said the event itself held a lot of potential for Eastern’s Greek life morale.

“One thing I like to see is events where Greek organizations get together because I believe there is a lot of beneficial things that come out of the Greek system when it’s done correctly,” Proctor said. “It has definitely changed my life for the better, so to see that be possible for other people is really encouraging.”

Proctor said he acknowledges the difficulties of finding founding fathers for Sigma Chi’s comeback to campus but that he is ready to take on the task.

An evening of connecting with interested students and fellow fraternities showed promise for him.

“It’s been encouraging,” Proctor said. “I mean, everything in the world of COVID seems to be slowing down. It’s been difficult, not going to lie, but that hardship is genuinely shared by everyone here.”

Alpha Psi Lambda, a coed Latino-interest fraternity founded at EIU in 2016, was also at the fair.

Blake Meadows, a senior majoring in biology, said that the event was a good opportunity for Alpha Psi Lambda to engage with a wider audience.

“We’re also excited to come to this event because we don’t really have like a Hispanic/Latino council here on campus and we thought coming to this would also help us advertise to the guys because we have trouble on this campus getting guys to attract towards it,” Meadows said.

“IFC is the Interfraternity Council, so it’s just the governing board over all the fraternities on campus,” Witt said.

Witt was also responsible for enforcing mask-wearing during the event, and said with the exception of a few people they were able to maintain that throughout the evening.

“I was a little nervous because we wanted to follow all the university guidelines,” Witt said. “When you get a big group like this sometimes it can be nerve-wracking because you want to make sure everyone’s following guidelines.”