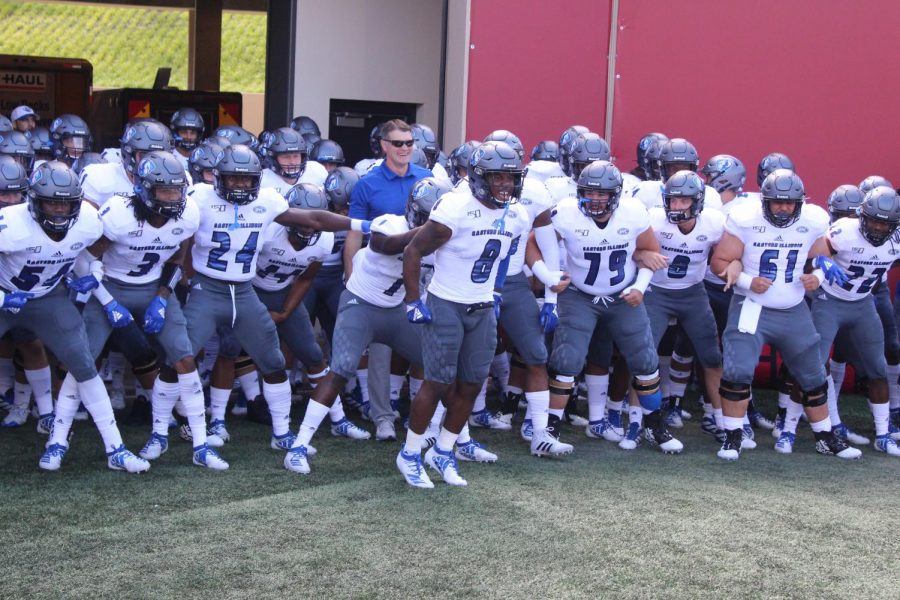 The Eastern football team exits the tunnel and prepares to take the field against Indiana on Sept. 7, 2019. The Panthers are set to resume football-related activities on Aug. 31 following the postponement of the 2020 season.

Head coach Adam Cushing said the uncertainty of the fall season was “mentally draining,” and without any official word on the status of the season until recently, it was hard to return to normalcy.

Even once practices resume, Cushing said that football will not be the most important factor.

“Student-athletes’ safety and health and wellbeing is the number one priority,” he said.

All across campus this semester, there are health and safety protocols in place, including mask requirements and social distancing measures.

Additionally, Eastern football has implemented entrance protocols, temperature checks and social distancing measures including keeping players three lockers apart from each other, having tape on the field to ensure that players remain 6 feet apart, providing players with their own personal water bottles and adding air purifiers in the weight room to the help constantly exchange the air.

Cushing said he has been pleased with the team effort and could not give enough credit to his supporting cast from Athletic Director Tom Michael to athletic trainers Jim Nave and Jason Heiar, Director of Football Operations Jesse Walton and the Strength and Conditioning coach Joe Orozco.

Cushing said he appreciates how his players have embraced these challenging times and how they understand what it will take to play and have a successful season, like wearing masks and understanding the protocols.

Eastern Football was looking forward to the 109th Mid-America Classic matchup against the Illinois State Red Birds Sept. 12. If the matchup does not resume it will be the first time since 2001, when it was canceled in response to the 9/11 terror attacks.

Another prominent game lost to COVID-19 was Oct. 10. In Lexington Kentucky vs. the Wildcats.

Once the team begins playing again, Cushing said he believes the future is bright for the Panthers in the years to come.