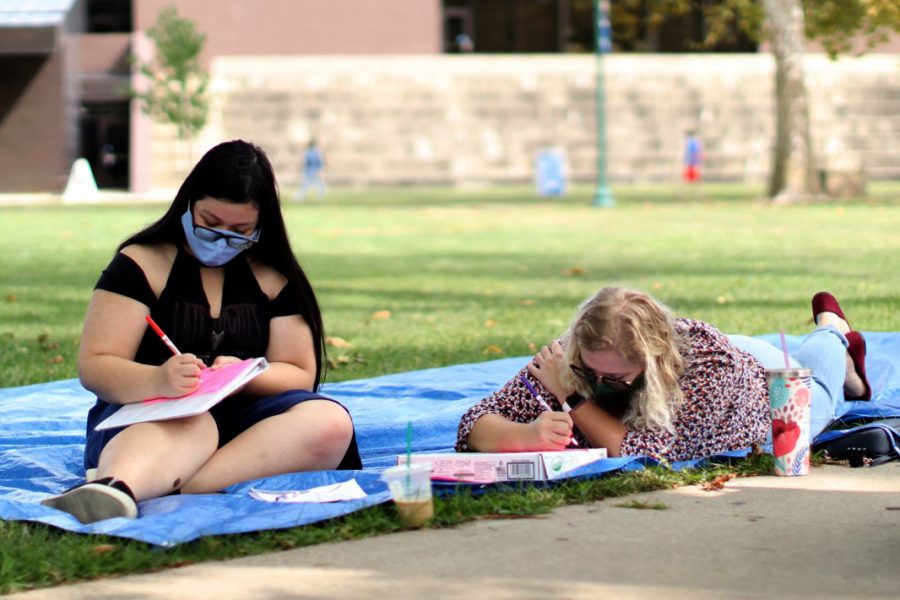 Victoria Tegge (left), a nutrition and dietetics major, and Olivia Triplett, an elementary education major, color together in the North Quad on Monday afternoon.

• This podcast is also available on Anchor, Apple Podcasts and five other platforms! Click here to find out more.

More people should know about the 2006 film “Perfume: The Story of a Murderer.”

Directed by Tom Tom Tykwer and starring Ben Whishaw, Alan Rickman and Dustin Hoffman, this cat-and-mouse murder story centered in 18th Century France played around with the power of human senses before “Birdbox” and “A Quiet Place” received national acclaim.

Separate from these recent titles, “Perfume” expands upon an intriguing question: What would an individual do with the ultimate sense of smell?

Jean-Baptiste Grenouille chooses a murderous path toward an ultimate, unprecedented goal: Preserving the scent of beauty.

The Summer 2020 edition of Popcorn Talk highlights older movies (pre-2010s) that have varying genres, cultures, themes and unique characteristics. Every movie reviewed is a unique gem its own way and totally worth checking out.

In this episode of “Popcorn Talk,” Logan Raschke, a senior journalism major at Eastern Illinois University and Fall 2020 senior designer for The Daily Eastern News, reviews “Perfume: The Story of a Murderer.”