Cushing on how Panthers are preparing for 2020 season, dealing with COVID-19 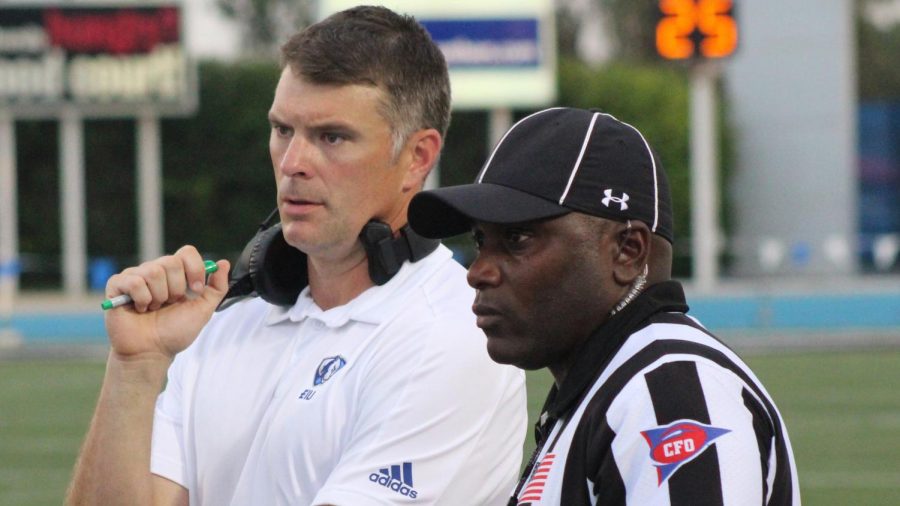 Eastern head coach Adam Cushing talks with the line judge during an official review in the Panthers’ game against Tennessee Tech last September.

There are just over two months remaining until the 2020 season opener for the Eastern football team. Whether the season will start on time, or start at all, is very much uncertain.

The team has continued to meet virtually since the start of the COVID-19 pandemic, which was just one of the aspects of the offseason that had to change.

“We figured out quickly, when our players were sent home, that this would cause big ripples,” head coach Adam Cushing said.

“ Recruiting was, obviously, dramatically affected,” he said.  “We would normally have a large number of recruits on campus from March thru July, and that was eliminated entirely.”

He said that he thought the staff did a great job reaching out to recruits virtually and creating relationship with recruits. There will be 45 newcomers to the 2020 roster, and two players have already committed for the 2021 season as well.

Cushing said that the current team has also been able to stick to their primary goal of the offseason, which was to “create connection.” The purpose of this was to create a close-knit team that would want to play for each other, and he said this is being accomplished through their Zoom calls.

But while the team still meets virtually, the coaching staff has been able to start meeting in person to prepare for the season.

“We met virtually until last week,” Cushing said. “We’re now back in the office, so we have in-person staff meetings with masks and in a room that allows social distancing between all staff members. We are continuing to meet with the team virtually.”

Cushing said that the team and staff is fully preparing for the season to begin on time.

“We’re excited for the season,” Cushing said. “All of our preparation is geared toward playing football on the field this fall.”

The 2020 opener will be a home game against Indiana State on Sept. 3. The Panthers played the Sycamores on the road last season, falling 16-6 on Sept. 21.

The second game of the season will be the 109th edition of the rivalry game between Eastern at Illinois State, taking place at Hancock Stadium in Normal.