Why ‘The Golden Girls’ helps me cope 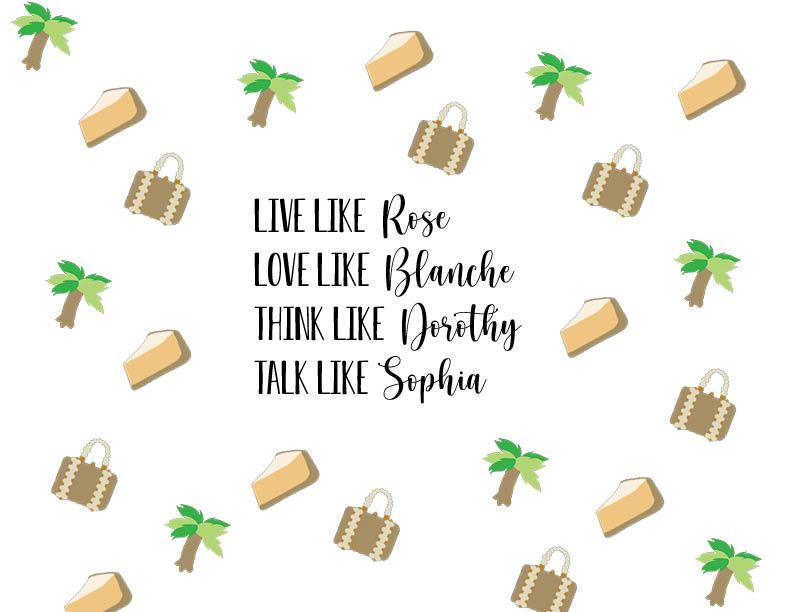 I don’t know if this is weird, but sometimes I listen to TV sitcoms in the background while I work.

And when I say “TV sitcoms,” I’m mostly referring to “The Golden Girls.”

For one, having some noise while I work, read or do tasks around my apartment sometimes helps me work harder (sometimes it does the opposite too, especially if the episode is a particularly great one).

Having that background noise also provides me a sense of comfort.

Since this pandemic started, I’ve found myself clutching onto many things that have brought my comfort in the past. In this desperate reach for comfort, I’ve been reminded of how brilliant “The Golden Girls” is.

For one, the casting is impeccable.

You have Rue McClanahan playing the provocative, glamorous Blanche Devereaux.

Blanche is a character with spice and energy, and McClanahan’s performance matches those qualities with an underlying insecurity that many people have: growing older.

Then there’s Betty White playing the pure, life-loving Rose Nylund. Rose’s character is optimistic and good-hearted. White’s performance shows command of the role and all of the subtle complexities of the innocent Rose (like the sweet, sincere sighs of glee we see on screen, for example).

Bea Arthur perfectly encapsulates what it takes to portray the witty, dignified Dorothy Zbornak. Dorothy is tough, headstrong, hilarious and logical — she’ll set any of the women straight while delivering a knee-slapper.

Then there’s 4-foot-11-inch Estelle Getty, playing the no-nonsense, sarcastic and fiery Sophia Petrillo. Getty packs a perfect punch in a small package, and that is exactly the kind of character Sophia is.

I’ve watched the show for about five years now; I first found out about it through my late grandmother (which adds to my love for the show).

Now that I’ve seen every episode probably 2 to 3 times, I’m so happy to see other people just starting to enjoy it.

It’s funny how old TV shows and movies become popular again after so many years (“The Golden Girls” first aired in 1985). Not just any show, movie or other form of entertainment can stand the test of time, however.

It takes a certain kind of TV show to remain popular and successful in the public eye for so many years. It takes timeless humor matched with fantastic writing (thank you, creator Susan Harris).

“The Golden Girls” has both of those qualities, but it also has something else: Meaningful stories.

“The Golden Girls” has covered a number of important topics, like dating after divorce, finding love after the death of a spouse, growing older, re-connecting with old friends. I find stories like these to be pretty common in “The Golden Girls,” and they’re always written carefully and wonderfully.

One of the episodes that comes to mind immediately is “72 Hours.” It’s the episode where Rose gets a blood transfusion and later finds that the blood may have contained the HIV virus. From there she has to wait 72 hours after getting tested before she finds out if she has HIV.

The episode has similar-toned jokes to the rest of the humor viewers expect, but it always maintains its seriousness. Every now and then the viewer is jabbed with a piercing, sad reality.

For instance, Sophia starts labelling the cups in the house with “R,” which are obviously for Rose. She’s doing it because she’s afraid she’ll contract the HIV virus from Rose. Thankfully, the understanding Blanche and the logical Dorothy set Sophia straight.

Blanche tries to explain the emotional side of the situation, saying “Listen, we are the only family Rose has here, so we have to help her through whatever she’s going through.”

Dorothy, understandably, explains the social consequences of Sophia’s actions: “Ma, that is just ignorant paranoia … You know, it’s attitudes like that that add to the panic about this. Now, what is wrong with you?”

Thankfully, Rose doesn’t test positive for HIV, but serious messages about the stigmatization of those with HIV and AIDS ring inside the viewers’ minds.

When Blanche first gets the devastating call, she can’t believe it. Dorothy, Rose and Sophia try to support her, asking if she’s all right, until eventually Blanche breaks down — coming to terms with the realization that he is dead. She even feels guilt for not visiting him soon before he died.

Even despite Blanche’s squabbles with her sister, she does return to her old home to see her father before returning to Miami. From there, she gives her own personal goodbye and comes close to at least some closure before returning home.

The main takeaway after each episode, regardless of its story, must be the underlying theme of the show: Everyone deserves support, friends and love. That’s what Blanche, Rose, Dorothy and Sophia mean to each other.

The show is so touching, impactful and prominent on top of being hilarious and entertaining.

If you haven’t checked it out yet, please do. It may be the one thing you need right now to help cope with your own struggles.

Logan Raschke is a senior journalism major. She can be reached at 581-2812 or at [email protected]