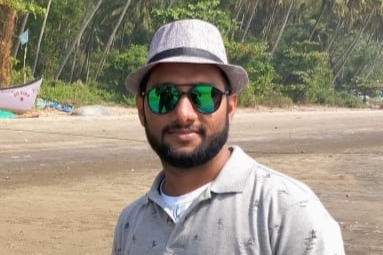 An Eastern student was shot April 9 in Maryland Heights, Missouri.

The student, Dheeraj Kumar Reddy Dega, is a graduate student studying technology and the Vice President of the Indian Student Association.

Dega was shot in the left side of his abdomen, and the bullet traveled through his body to the right side of his body, damaging his intestines and liver, according to a fundraiser page started to help pay for Dega’s medical expenses.

KMOV4 reported on April 9 that police have taken a suspect in connection with the shooting into custody.

As of Monday night, the fundraiser had collected $230,000 dollars, which will “cover the costs of hospital stays, rehabilitation facilities, and 24/7 care for Dheeraj as he transitions into a life that is different, but still his own,” according to the fundraiser page.

Dega has been able to open his eyes and is conscious but is using ventilators. He has a surgery scheduled for Tuesday.

Dega is an international student from India and came to Eastern in January to pursue a master’s degree.

Rakesh Nalagandla, a graduate student studying technology and a childhood friend of Dega’s, has been relaying information from doctors and nurses to Dega’s family and friends.

Nalagandla said Dega overcame a hard childhood as an orphan and continues to push himself to succeed.

“He is very kind and helpful to all his fellow students in studies. He had five years of work experience back in India. He is technically strong in his area where he worked,” Nalagandla said. “He came here to pursue master’s and increase his knowledge and become an expert in the area of his study.”

Chandra Shikhi Kodete, President of the Indian Student Association, is a friend of Dega’s and said he is involved on campus beyond his role as VP for the organization.

“…(Dega) is a self-dependent person with down-to-earth attitude. He is always active in our campus and caring about the people around him. He actively used to participate in games like cricket and volleyball with other fellow students at the recreation center,” Kodete said.

“He is a very nice young man who is family-oriented and respected by his peers. I am grateful for the opportunity to have him as a student,” Turner said. “I pray for a speedy recovery.”

Turner added Dega is active in the classroom.

“He’s one of the first to jumpstart a discussion. I can always count on him to participate in class,” Turner said. “We enjoy listening to stories he shares from his life in southern India. He is a natural-born leader who is not afraid to try and make a difference.”

Dega’s friends said they are just hoping for the best in the coming days.

“As a well-wisher, still I am and all the other students, his friends and relatives are in a shock after knowing this,” Kodete said. “We need any possible support and prayers from every possible resource for his speedy recovery.”

Nalagandla said he will be there for Dega throughout his healing process.

“All of the sudden this incident shattered all his dreams and thoughts. But we strongly believe that he will come back stronger than before because he was a fighter from his childhood. He never gave up on his thoughts and work. He had many situations in his life where he fought and came back with double energy. We are expecting the same thing to happen again,” Nalagandla said. “We love him a lot. He is not fighting alone anymore. We are here to help.”