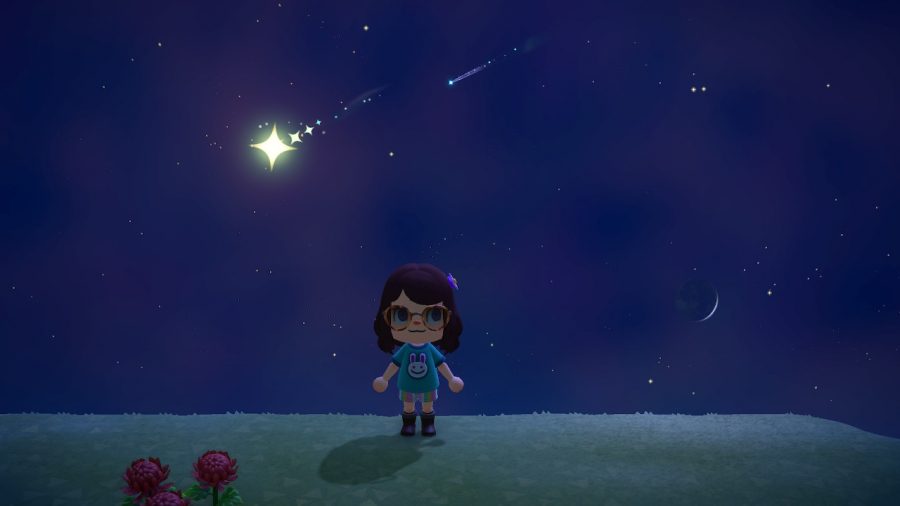 Screenshot from "New Horizons" from Nintendo's new "Animal Crossing" game for the Switch.

As of now, I’ve played more than 100 hours of “Animal Crossing: New Horizons,” and I’m wondering how that’s even possible.

Think about it; 100 hours since March 20. That’s about 25 hours per week. That’s basically a part-time job playing a video game.

The game is highly addictive, and being in quarantine because of the COVID-19 pandemic has only made binging the game so much easier. That doesn’t mean fans wouldn’t be doing that anyway, however. The game is fantastic for many reasons, even if it does have a few flaws.

The Animal Crossing franchise is perfect for the Nintendo Switch console. The Switch gives the game handheld and docked TV play, which fits the Animal Crossing style flawlessly. Feel like lying in bed all day playing “New Horizons” with the screen five inches away from your face? You got it. Want to play it on your television to get the full effect of a beautiful sunset sky? No problem.

The actual gameplay is on par with previous games like the original “Animal Crossing” for the GameCube, “Wild World” for the DS and “New Leaf” for the 3DS, for example. You still play as a human villager doing villager things — bettering your community in multiple ways, connecting with different animal villagers and customizing your home to your liking.

It’s a simulator at its core, but there’s a connection players have to the game that’s hard to describe. Ever since the first Animal Crossing game, NPC dialogue has played a huge role in the franchise’s identity and success. Animal villagers have very fun dialogue, and when a villager says something to the player, it usually means something. NPC dialogue is usually never filler; it has purpose. For this reason alone, fans have devoted hundreds upon hundreds of gameplay hours and spent hundreds of real-life dollars buying amiibo cards so their favorite animal villagers can accompany them in the 3DS games and onward.

When a villager is mean to you, you feel it. When they’re caring or loving, you feel it. It may seem juvenile or strange to someone who hasn’t played a simulator like this, but it doesn’t make the sentiment any less true.

These same great dialogue options are certainly present in the newest Animal Crossing game. While I personally have not socialized enough with all of my villagers to get some best-friend, truly heartwarming dialogue yet, I adore the writing in this game.

A great example of great dialogue between NPCs happened while I was walking around my town. I found two animal villagers, both of whom had the same smug-type personality (there are eight total villager personality types, and each dictates character dialogue/actions). They were going about their days and having a conversation, so I decided to eavesdrop. Here was the dialogue:

Jacques: “So tell me, Julian. What’s the one thing you could NOT live without on this island?”

Julian: “Uhh, isn’t it obvious? Say it with me, Jacques.”

Julian: “Right…because how else could you tell whether your lips were getting sandy and chapped…That’s just smart thinking.”

Jacques: “Now if we’re talking THREE essential things, that’s where it gets tricky. But I think there’s a strong choice. Say it with me now! Lip balm, a mirror, and…”

Julian: “A tiny umbrella to put in your green tea!”

I really loved this unique dialogue. It showed both characters’ amplified personality types while they bonded with one another in, albeit a silly and absurd way, but in good fun. That’s the thing about this game; you really shouldn’t take it too seriously, especially when your neighbors are spewing things like this. But then again, this is part of the game’s charm. The writing is solid while still being wholesome.

“New Horizons” has sort of an unspoken philosophy. Take time to smell the roses. It’s a calming game that works in tandem with reality. The game goes by the system’s clock, so noon in real life is also noon in the game. This means the game is one you’ll likely revisit every day for maybe a couple hours each day instead of long, 3- to 5-plus-hour sessions spread out throughout each week.

You can play the game however you want, but at its core, Animal Crossing is a game that exemplifies the simple, yet beautiful aspects of life.

In-game tasks are simple, like digging up fossils to donate to the museum, planting flowers hoping they might crossbreed to make new colors, collecting bugs and fish, and socializing with your neighbors while you improve your island and home. The only fighting in the game is petty squabbles with NPCs, and the only real finger-biting moments are potentially losing bells, the game’s currency, by having bad luck investing in turnips (stocks).

The graphics are also quite good. The game is capped at 30 frames per second whether you play in handheld or docked mode. While 30 FPS is sometimes problematic for certain video games, it doesn’t negatively impact this one in particular. Some players may take issue with it, but it doesn’t hinder the gameplay experience — even after more than 100 hours (I promise I have a life, just take my word for it).

The biggest upgrade that singlehandedly makes the game worth the $60 price tag is the new museum. It’s beautiful on the outside and absolutely stunning on the inside.

So far there are three sections: fish, fossils and bugs. The different sections are expansive, and they breathe life. You feel proud visiting the different exhibits, seeing the creatures you’ve caught and fossils you’ve unearthed. It makes you feel like you’ve made real cultural and scientific contributions to your town and the residents’ lives.

The fossil exhibit is perhaps the most impressive. In previous games, the exhibit was limited in structure, dimension and even color palette. In this game, the exhibit’s subtle, yet powerful pops of color combined with realistic imagery give players the impression of visiting a real state-of-the-art museum. The special butterfly exhibit is bursting with color and life (and it makes a great spot for photoshoots).

Features like the game’s inventory upgrade gives players the freedom to carry way more items with them than in previous games. Additionally, the storage and decorating systems make storing items and designing your home a breeze. The tool ring system makes switching between tools almost instant. These are simple updates that some would argue should have existed in every game, but they didn’t. Now that they’re available, everything is so much easier and much less frustrating.

These positive points don’t suggest the game is perfect, however. This newest Animal Crossing game has a totally new construction feature. Now players can change the layouts of their islands, from adding/destroying cliffs and rivers to making interesting or custom-designed paths. This is a fantastic feature; it means players can truly build their dream islands.

But the interface is far from perfect. All construction is limited to one spot at a time, which is very, very slow if you want to do some serious layout changes. The interface is also a little finicky, relying on specific angles for players’ characters to face in order to cut or add land/river the way they intended. If players are careless, they could accidentally add and delete the same one spot of land/river five to 10 times before calling it quits. It’s frustrating and tedious, but it could be mended by a grid system, allowing players to change multiple spaces at once in exact locations.

Another problem is a big one. Multiplayer. While having the game on the Switch makes playing with friends easier (because it’s on Nintendo’s newest system, minus the Switch Lite, which operates the same online as the Switch), multiplayer in “New Horizons” is needlessly time-consuming and repetitive. In order to play online and visit a friend’s island, both players have to sit through a 30- to 60-second cut scene before the player even arrives. When a player leaves, another overly long cut scene plays, which is so unnecessary. During these cut scenes, gameplay is completely halted for all players. Think of playing the game with five to seven other people (you can only have eight players on an island at a time). If it takes two minutes of cut scenes for players to join, that could mean 20 minutes of annoying game delays just to play with others. That’s not fun at all.

Thankfully, Nintendo has already been patching the game’s more minor flaws, which means it will hopefully work on fixing some of these bigger issues eventually.

In the meantime, “Animal Crossing: New Horizons” is the perfect game to play in quarantine. We’re all deprived of social interaction and stuck at home, so “New Horizons” is quite the escapist’s dream.

Thankfully, “New Horizons” is here to let us smell the roses virtually, even while a pandemic reminds us each day that no matter what, life will never be as simple as it is in the Animal Crossing universe.