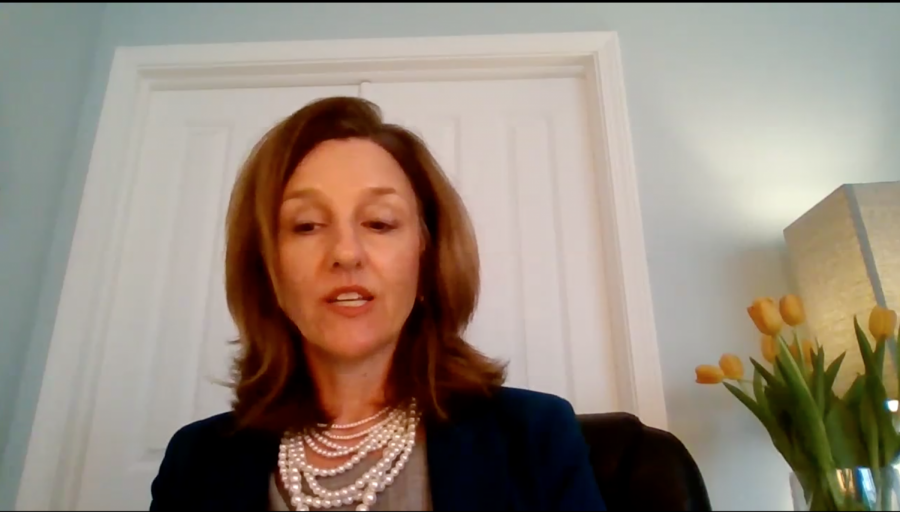 Anne Flaherty, a candidate for Eastern's Vice President of student affairs position, answers a question during her live-video session with students Thursday. Flaherty is one of four candidates being considered for the position.

The first open-meeting video session of Eastern’s search for a new Vice President of student affairs was held Thursday afternoon. Candidate Anne Flaherty was the first of four finalists to answer questions for students and faculty via video.

The video interviews, accessible to Eastern students and staff through a link provided in their emails, are taking the place of on-campus live sessions, which have been canceled because of the global COVID-19 outbreak.

Flaherty, who has worked most recently at Washington University in St. Louis and Butler University in Indianapolis as the dean of student life, answered a question about how she would handle one of Eastern’s more visible issues: low student involvement in things like concerts or athletic events.

“Is the offering not of interest to that student? Is the offering not being made available at a time that doesn’t work with the student’s schedule? Does it just happen to fall in a time with a cluster of tests and exams? A lot of factors,” Flaherty said. “I think kind of the more surface level is, I would say, ‘Do we have any data?’ It’s hard to know why a student doesn’t come to a program because you can’t survey them, you can only survey the ones that do come.”

Eastern’s low student interest in its spring concert in 2019 led to the event being  free because so few tickets were sold.

“But you can look at the types of programming that you have, and are you seeing a lot of the same people? Are they folks with kind of similar identities or levels in school?” Flaherty said. “Or I always find it’s hard to get student athletes to events because they’re just so busy through their practice and their academics and their sports schedules.”

Flaherty said looking at how and where a program was marketed also plays key into evaluating its success.

“How is the program being marketed? Are student leaders showing enthusiasm and excitement for it?” Flaherty said. “There’s so many factors, and there is nothing more discouraging than planning an event that you think is really great and wonderful and not having participation. So, I think you have to do some honest assessment about the event.”

Securing a diverse group of individuals for planning was another factor Flaherty said was important to hosting successful campus events.

Flaherty was also asked a round of questions regarding her experience in working with LGBTQ+ groups and people on college campuses.

Flaherty said her work with LGBTQ+ students has been pretty consistent throughout her entire career but spoke specifically about work she did while the dean of student life at Butler University.

“(Butler) has a registered student organization called “Alliance.” I think it might be similar to a group called “Pride” at Eastern, I believe, and that group has had a long tradition of program and advocacy and support around LGBTQIA+ students on campus, and during my time at Butler, there were a group of students within Alliance that identified as transgender, and they did feel that their needs and priorities were not being met by Alliance, and so they came to me and my dean of students and talked through this,” Flaherty said.

The group of students wanted a way to maintain affiliation with Alliance but also do initiatives that were directly supporting transgender students, Flaherty said. The group went on to form a “spin-off” group called “TransForm,” which asked Flaherty if its members could operate outside the confines of a normal RSO. Flaherty agreed to let them do that as long as they were transparent with administration.

Flaherty was able to help expand gender inclusive housing and bathrooms to all of Butler’s residence halls during her time there, she said.

Eastern’s high-scores from national LGBTQ+ group “Campus Pride Index,” which ranks college-campuses on inclusivity, excite Flaherty. She offered “kudos” to Eastern for being recognized by this group and said that is something she would have liked to complete in her time at Butler.

The student interview session ended with Flaherty being asked what five words she would use to describe why she was the best fit to be Eastern’s next vice president of student affairs.