Eastern can look ahead to next season 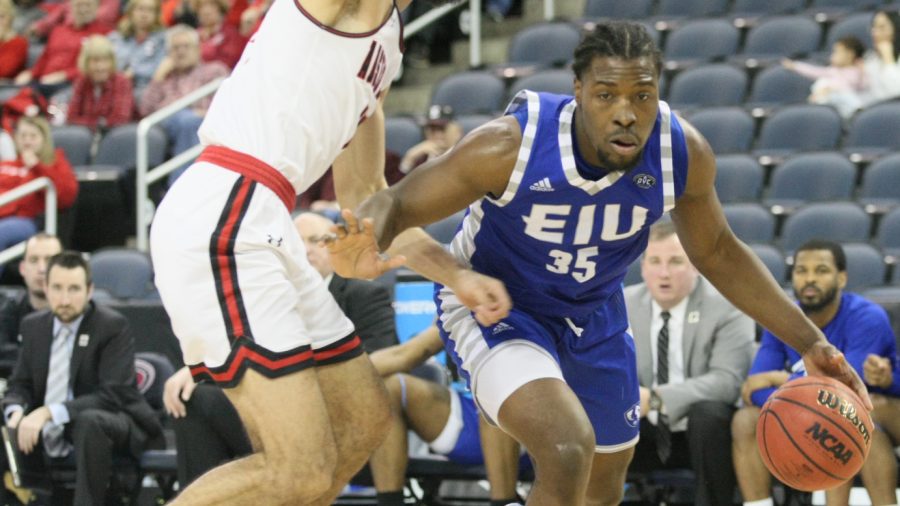 Eastern’s George Dixon drives around an Austin Peay defender in the quarterfinals of the OVC Tournament in Evansville, Indiana. Dixon had 15 points and 12 rebounds in the game, which the Panthers lost 76-65.

The men’s basketball team once again looks forward to next year for a chance at winning the OVC Tournament, but not without promise.

Despite going 9-9 in conference play and playing poorly in the first half of their quarterfinal loss to Austin Peay in the tournament last week, the Panthers can look to next year with optimism over the talent returning and, though not known yet, incoming talent.

But, there is one very big thing that needs to happen during the offseason, mainly the recruiting season, for Eastern’s program to be successful in the long run.

Why the Panthers can be optimistic

Eastern went 9-9 in conference play, and looking at how many close losses are in those nine losses (seven losses by five points or less), it would be easy to misconstrue the data in many ways, including bad ways.

The bad way to look at this data is to say that Eastern cannot close out games, which is true to an extent and needs to be fixed next year too, but the way Eastern can look at it also is that the Panthers were competitive in a lot of their conference games.

Eastern went 1-1 against both Murray State and Austin Peay, the two and three seeds in the tournament respectively, with both losses coming by four points or less.

Against Tennessee State, the five seed, the Panthers lost by four, and in their first loss to Eastern Kentucky (four seed) on the road, they lost by three.

If Eastern won just three of those close games, the Panthers would have been the five seed in the tournament, possibly even the four seed depending on which games they would have won.

That has to be a good feeling going into next year, especially considering the next point.

Deang Deang, who missed the rest of the season after getting an injury in December, could also score nine points a game and was the Panthers’ best defender.

Should all of those players return, with guys like Kashawn Charles and Jordan Skipper-Brown also returning off the bench, Eastern will be loaded next season.

Within that core are guys who can score, defend and help facilitate the offense.

What all seven of them also have in common is the fact that next season, they will be seniors.

That means Eastern head coach Jay Spoonhour will have to not only get transfers next season, but also freshmen — multiple freshmen­­­­ — because after next season, seven players who all get significant playing time will be graduating.

Spoonhour surely knows that, and in fact, March 7, Jackson Connor, from Marion, Illinois, tweeted that he received an offer from Eastern to join the basketball team.

With recruiting, if there was one certainty for Eastern to get (aside from freshmen), the Panthers also need to get some size.

Dixon was second in the conference in rebounds per game and could play inside with the best in the conference, and Skipper-Brown has amazing athleticism that allows him to jump high and be agile.

But they are both 6-feet-6-inches tall or less, while other teams in the conference have taller and longer players.

If Eastern wants to truly compete in the OVC, Belmont, based on this season’s results, is the one team Eastern still cannot figure out (Belmont defeated Eastern by 32 points).

Who is on Belmont’s roster? Just Nick Muszynski, who is listed at 6-feet-11-inches tall and happens to be an all-conference player.

He also happens to be just a sophomore.

While Eastern does not literally have to find a player of equal height, getting someone who is 6-feet-8-inches or taller and can defend and score, even if they do not play the whole game, would be helpful.

In recent history, Eastern had Muusa Dama, Aboubacar Diallo and Rade Kukobat who were all 6-feet-9-inches tall and could play good defense in the lane, while scoring well, too.

Success next season starts right now in the offseason, with Eastern keeping its head high about what it did this year and can do next year, but also with the recruiting process to bring in new talent, while also retaining the talent from this season.

If everything plays out the right way, Eastern could legitimately compete for the OVC championship next year.