‘These Shining Lives’ performed at Eastern 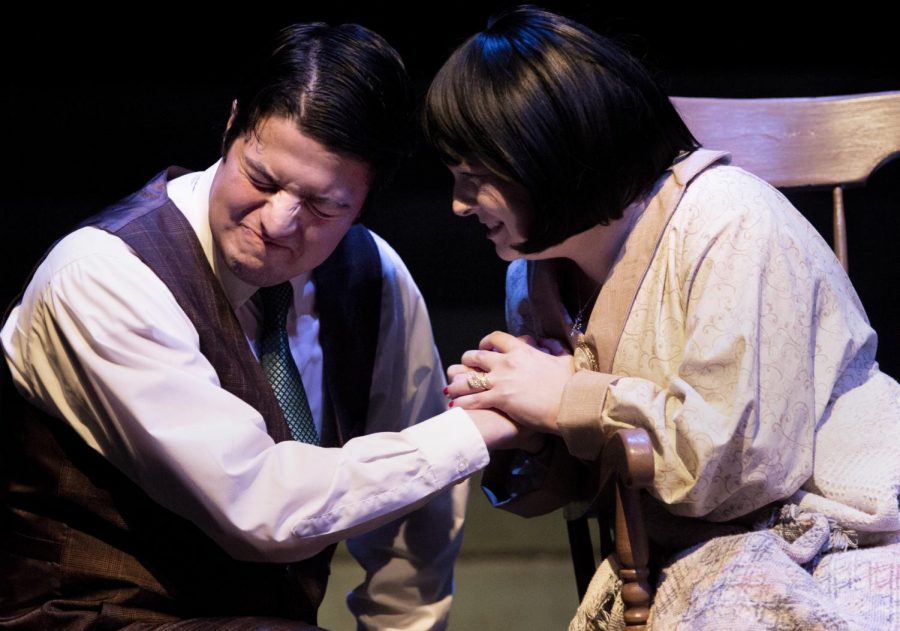 Time, it seems, was inescapable for four women: Catherine, Pearl, Charlotte and Francis, as they each laughed and cried together during “These Shining Lives” at the Doudna Fine Arts Center in The Theatre on Thursday, Friday, Saturday and Sunday.

The play is a docudrama based on true events that occurred before and during a court case the “Radium Girls” filed against U.S. Radium Corp. in Ottawa, Illinois, for knowingly allowing the girls to not only ingest radium paint but then trying to cover up the fact the girls had gotten radium poisoning.

Hernandez said the play emphasized that no one’s life should be put in jeopardy for business profit.

Lee said she thought the story was encompassed in one quote, which was included in the script by the playwright, Melanie Marnich.

“It’s this quote: ‘If one woman were to tell the truth about her life, the world would split open,’” Lee said. “The play is basically about four women who are hurt by some big industry but, though they suffer and die, they change the law. Isn’t that amazing? Just four women changing the law. I think this quote just tells the most essential part of the play.”

Even though the play had some heavy themes present throughout the performance, there was still an uplifting tone through the girls’ strength and perseverance. Lee added the play wasn’t centered around anyone extraordinary, but just four regular girls who wanted to work.

“And I think that gives messages to people because we are all ordinary people and we have the power to change the world.”

Hernandez added that Tom’s character added another message in the play.

“We’re only given so much in life that we have to appreciate it to the fullest extent, and that’s something about the show that I had the best experience with,” Hernandez said. “The fact that in the first half, you’re here enjoying every minute of the time you’re given with your wife, and you’re enjoying it so much that it actually goes by really quickly, and then, in the next half, when your wife has this ailment, when your wife has this illness, it feels like the play is going longer and longer because it’s a nightmare that you just want to end, but doesn’t come to an end so fast; you have to relive it every day.”

Whitney Hill, a senior community health major, watched the play on Saturday night. She said she thought the acting was believable and attention-grabbing.

“I was engaged throughout the play,” Hill said. “I like it when I’m able to be intrigued instead of spacing out, and I wasn’t spacing out, so it was good.”

“I didn’t notice that when she was asking her husband, ‘Do you see me?’ she was saying like ‘I’m glowing,’” Ayiku said. “I thought what she was saying like, you know, her features. I did not know that she noticed from the very beginning that something was changing in her.”

Brenda Skinner-Peters, an Urbana resident, said the play had opened her eyes to a problem she had not known about before.

“It woke me up to stuff that I knew it was maybe going on, but it was one of those things you sweep under the rug,” Skinner-Peters said. “But now I do think about it, I mean a show like this can tell a lot of people about this stuff. It’s going to wake up anybody about a lot of things.”

Thomas Hawk, a retired theatre professor at Eastern, said he thought the show was great.

“One thing that I did notice, during the intermission, I saw cell phones, but I didn’t see any during the show,” Hawk said, “It’s fantastic; that’s a sign of a good show.”