Skyhawks end Panthers’ season in the semifinal of OVC Tournament 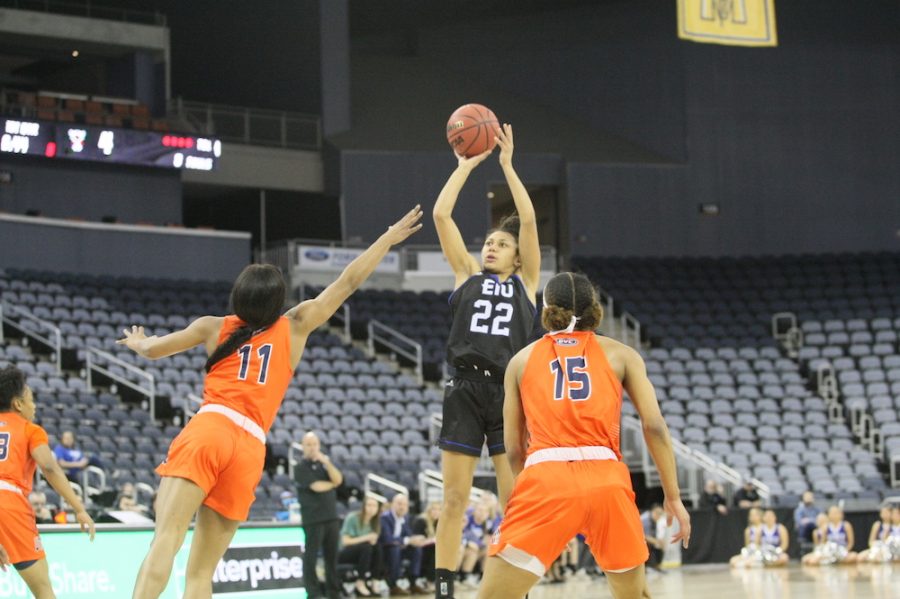 Dillan Schorfheide | The Daily Eastern News Lariah Washington rises above her defender to get off a shot attempt. Eastern lost 63-52 to Tennessee-Martin in the semifinals of the OVC Tournament Friday.

Eastern’s women’s basketball team fought until the very end, but Tennessee-Martin’s scoring duo of Madie Waldrop and Chelsey Perry was too much for the Panthers, as Eastern lost 63-52 in the semifinals of the OVC Tournament Friday.

Waldrop led the game in scoring with 20 points while Perry added 18 points to send the Skyhawks into the OVC Tournament finals.

The Skyhawks will play the winner of Southeast Missouri and Belmont.

Eastern was predicted to finish tenth in the conference and finished 19-12 with regular season accolades in OVC Freshman of the Year in Lariah Washington, and her and Karle Pace were named to the All-OVC 1st team.

“It gives us a lot of momentum,” Pace said. “People have always doubted us and it makes you feel good to prove them wrong.”

Eastern head coach Matt Bollant said he was proud of his team and this season and the turnaround of the program.

The Panthers will return every player but Jennifer Nehls next season. Nehls made a three-pointer late in the third quarter that gained momentum for the Panthers, and when asked knew she wanted to be ready when relied upon.

“I really appreciate (Nehls) and what she’s done to help build the foundation here,” Bollant said. “There’s a lot of players that you inherit or come to when you don’t win or handle it the right way. To be here fighting and supporting the program and doing what she did and the way she competes she’s helped us go from 3 (wins) to 19 (wins) and it shows a lot about her character and faith.”

Waldrop erased any momentum the Panthers made in the third quarter when she scored seven straight points in the fourth quarter by making a three-pointer, a midrange jumper and a layup to put the Skyhawks up 58-42. The Panthers aimed to rally behind a three-point play from Abby Wahl and a Jordyn Hughes three-pointer to bring the Panthers to 61-48 with a few minutes left in the game.

The Skyhawks answered with a Demi Burdick three-pointer and a Perry layup to put the Panthers down 63-48.

Perry received an intentional foul with three minutes left in the game and junior Taylor Steele missed both free throws and Eastern failed to capitalize on the bonus possession.

“We didn’t get the quality of shots we needed,”  Bollant said. “I thought we played a really good third quarter and it gave ourselves a shot. We just needed to have a fourth quarter like the third and we just needed to come out and score, but we just didn’t make enough shots.”

To start the third quarter Tennessee-Martin relied on Perry and Waldrop for their offense as they combined for 13 straight points for the Skyhawks. Perry began the quarter scoring eight straight points by getting to the inside for layups and knocking down contested midrange shots.

Waldrop started her offense by going 3-of-4 from the free throw line and then got into the lane for a layup. A pair of Brittni Moore free throws put the Skyhawks up 48-32.

Then the Panthers began to claw back into the game. Steele made her fourth three-pointer of the game, Washington made free throws and Nehls made a three-pointer to narrow the Skyhawks’ lead to end the third quarter.

In the first half, the Panthers began in similar fashion against Tennessee-Martin as they did against Jacksonville State Thursday. Perry was held to only one field goal in the opening minutes and Waldrop and Dasia Young each went 1-of-2 from the free throw line.

Steele began the scoring for the Panthers knocking down a three-pointer from the right arch and a Washington midrange jumper gave the Panthers their only lead in the first half, 5-4. Waldrop, Young and Perry then created a 6-0 run for the Skyhawks with layups and mid-range jumpers.

The Panthers answered back with sophomore Jordyn Hughes checking in and making a drive to the basket for a layup and Steele knocking down her second three-pointer to narrow the Skyhawks’ lead to 12-10. Waldrop and Perry created a 9-0 run to end the first quarter and give the Skyhawks a 21-10 lead.

In the second quarter the Panthers began a 6-0 run when Hughes made a mid-range jumper, Wahl made a three-pointer and a Washington free throw cut the lead to 23-16. Pace went 2-of-2 from the free throw line, but those points would be the last for the Panthers in the first half.

The Skyhawks slowed down the Panthers by containing Pace and other players while capitalizing offensively. The Skyhawks ended the second quarter with a 9-2 run holding the Panthers scoreless for the last 3 minutes and 42 seconds to give themselves a 32-18 halftime lead.