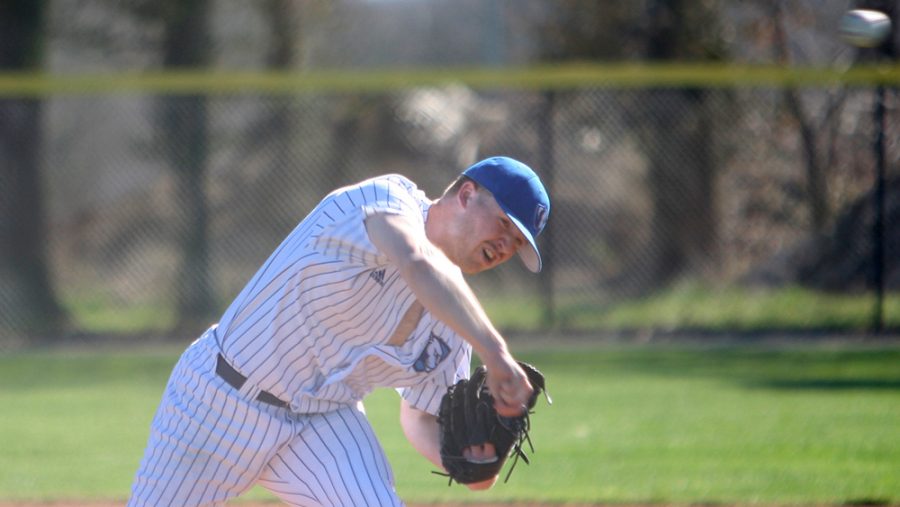 Will Klein completes his follow through and lets his pitch fly toward the batter. Eastern lost 6-3 to Northwestern State on the road Sunday.

While this weekend may not show for it in terms of wins, the Eastern baseball team still finds itself in good standing.

The Panthers played Northwestern State on the road for a three-game series, dropping two of three games.

Eastern did secure a 5-1 win Feb. 29, in large part of junior Blake Malatestinic’s efforts on the mound, tossing seven-and-a-third innings, allowing no earned runs and striking out nine.

Redshirt junior Matt Mackey made his presence felt at the plate, belting a two-run home run in the fourth inning to open the scoring, and Eastern scored three more in the ninth to claim the victory.

“The pitching and defense has been huge for us and kept us in games,” Anderson said. “Our offense has struggled but will come around as the weather gets better; we can play home games and actually practice outside.”

Junior Will Klein started game one of the series, and he was just as good, going six innings, allowing three earned runs and striking out nine. The only blemish was Klein walked five batters.

Klein is mainly known for being a reliever, but he is slowly transitioning into a starting role; that has not affected him all too much.

“It’s been different than relieving for sure,” he said. “I’m still trying to find the balance between trying to save energy for late in games and not letting off the gas pedal too much in the early innings, which I did a little this past week. I got to get in the mindset that I got to get through the first few innings to even make it to the end of a game, so I’ll be kicking it up a notch this Friday.”

In the final game of the series Sunday, Eastern produced all of its runs on RBI singles from senior Ryan Knernschield, sophomore Trey Sweeney and redshirt freshman Gunner Smith.

Sophomore Jesse Wainscott got the start on the mound, lasting four-and-two-thirds innings, allowing two earned runs and striking out one.

Junior Trevor Nicholson came in relief along with redshirt Junior Blayke Cutts. Nicholson did allow four earned runs in two innings of work, but since Wainscott left the game when the Panthers were trailing, he got his first loss of the season.

Cutts got an inning-and-a-third of work in and allowed just one hit.

The Panthers are now 4-5 overall, and they have won four of their last six.