Analysis: There are good matchups in the women’s OVC Tournament 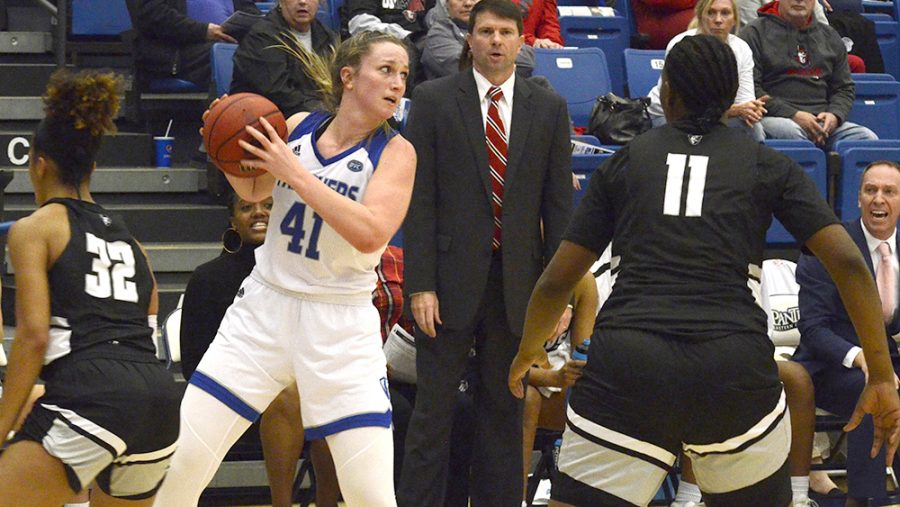 Abby Wahl looks for a pass with a couple defenders around her. Eastern defeated Austin Peay 73-72 Feb. 22 in Lantz Arena.

The Ohio Valley Conference basketball tournament picture is finally set. Beginning Thursday, the top eight women’s teams from the OVC will battle for the conference championship title and an automatic berth to the NCAA Tournament.

The seeds are set, the matchups are scheduled, and it all looks exactly how we all thought it would … OK, maybe not, but at the very least the tournament appears ready to deliver some very intriguing games.

This is the matchup pairing that is the most surprising to see in the first round of the tournament, given that for at least the last two weeks of OVC play, it seemed like a sure thing that Eastern would be playing Tennessee Tech in this spot.

But Tennessee Tech lost four games in a row to finish its season, giving Jacksonville State a nod at the No. 5 seed. Eastern beat Jacksonville State by just three points in its lone meeting this season at Lantz Arena, so this figures to be another close game.

This is Tennessee-Martin’s game to lose.

The Skyhawks beat the Racers by a combined 67 points in two games this season and Tennessee-Martin will also head into the tournament riding the play of Chelsey Perry who led the conference in scoring this season, averaging 23.7 ppg.

Belmont held OVC opponents to just 52.7 ppg this season, the top in the conference. Belmont forward Ellie Harmeyer was second in ppg in the OVC this season (18.7) and will be the most talented player on the floor in this game.

Austin Peay likely won’t be walked all over by Belmont, as evidenced by Austin Peay’s three-point loss to the Bruins in January, but Belmont is probably just too talented for the Governors to handle.

Keep a very close eye on this game because this is far from a typical No. 3 vs No. 6 contest. Tennessee Tech might be the most dangerous six-seed to ever play in this tournament, and that is not that crazy of a statement.

The Golden Eagles lost their final four games of the season to fall to the No. 6 spot, but prior to that Tennessee Tech was playing like a potential two or three seed.

Southeast Missouri has been incredibly hard to beat this season and beat Tennessee Tech in both meetings, but it should not be undersold how dangerous this Tennessee Tech team could be in the tournament.