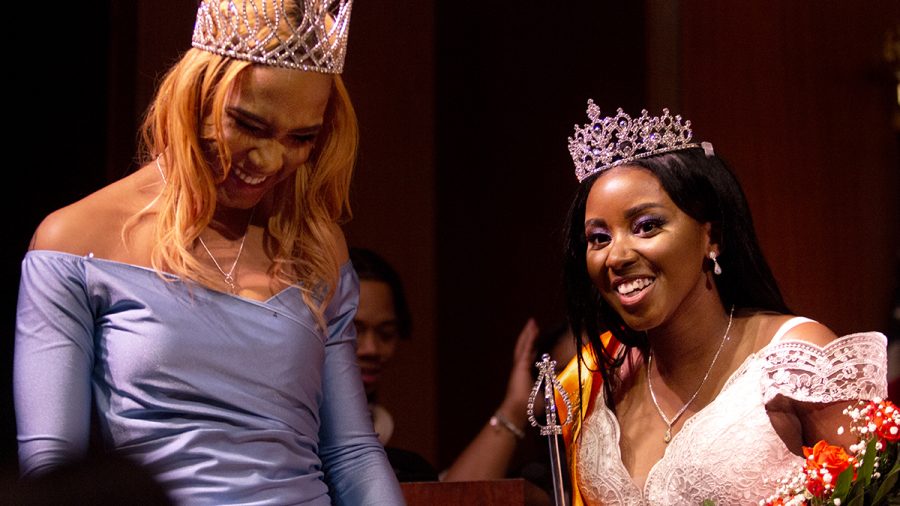 Latricia Booker, a junior majoring in pre-nursing and Miss Black EIU 2019, and Mikayla Sanford, a biological science major, celebrates together after Sanford’s crowing as Miss Black EIU 2020 in the Grand Ballroom in the Martin Luther King Jr. University Student Union on Saturday night. The two took several photos together as the previous and currently reigning queens.

Sanford, along with three other women, competed for the scholarship as well as the honor of becoming the next Miss Black EIU.

After the introduction of the Master and Mistress of Ceremony, freshman music technology major Armani Brooks and senior kinesiology major and Miss Black EIU 2018 runner-up Rajah Matthews, the four contestants introduced themselves to the crowd and explained why they should be crowned Miss Black EIU 2020.

During the first category, creative expression, the contestants all performed original monologues about the struggles they have faced in life and the things that are most important to them.

Runner-up Byrd’s monologue gave the crowd an insight into mental health in the African American community by talking about personal experiences with depression, PTSD, anxiety and more.

The contestants then changed into African garments for the heritage speech portion, where they strutted the stage in tribal clothes while a pre-recorded voiceover played of each woman explaining what their history and heritage means to them.

The talent portion of the pageant followed with each participant showcasing a certain unique skill, hobby or ability.

Campbell used interpretative dance to display her faith in religion.

For the evening wear portion of the night, each participant was escorted on stage individually where they then answered a question pertaining to racism, confidence and voting while displaying beauty and poise in their gowns.

Special recognition awards were handed out to contestants for various sections of the competition before Miss Black EIU was officially crowned.

Byrd won not only runner-up, but Miss Enterprise and Miss Congeniality as well as the talent portion and the campus choice award where people in the audience could vote for their favorites via Twitter.

Sanford said she believes that being Miss Black EIU means being a role model and leader in society while also giving African American women a voice to express themselves.

“To me, the crown means being a role model and I’ll now be able to be that role model to young girls,” said Sanford. “I feel like I can use my platform, which is abuse, to expand that throughout the community and throughout the campus to educate people on the negative traits and the signs of abuse.”

Junior pre-nursing major and Miss Black EIU 2019 Latricia Booker said she believes the pageant is an important tradition on campus.

“It (the pageant) is very important to the black community because it gives us a chance to show and share our culture,” Booker said.

The pageant was hosted by the Black Student Union, an on-campus organization that celebrates African American culture, history and lifestyles.