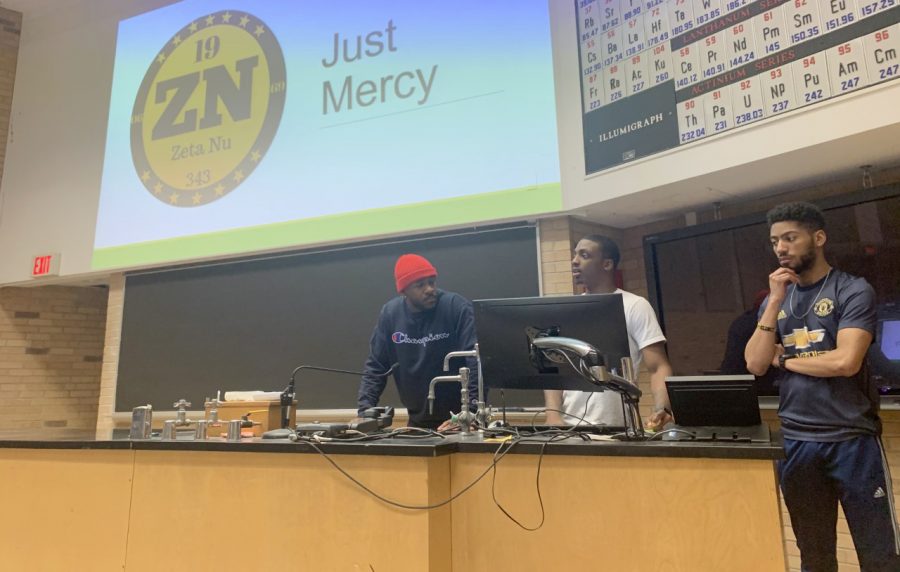 Kortney Lucius (left), a junior pre-med biology major, David Hagler (middle), a senior business management major, and Joshua Ware (right), a senior applied engineering technology major, present Just Mercy: Discussion About Wrongful Arrest Thursday at the Phipps Auditorium in the Physical Science building. The purpose of the Just Mercy theme in general is about the incarceration of Latino and black individuals ­— specifically, how it has been affecting them for too long.

David Hagler, a brother of Alpha Phi Alpha Fraternity, Inc. and a senior business management major, said that the event was part of African-American Heritage Month and discussed the problem of wrongful conviction and incarceration among men of color.

“This is one of the events we have for Black History Month, and since February is ending we just wanted to do an event talking about wrongful incarceration for African-Americans and Hispanics, just to get the topic out there that African-Americans are still being wrongfully incarcerated,” Hagler said.

Yolanda Williams, an academic and retention adviser with the Office of Inclusion and Academic Engagement, said that the topic of the event was beneficial for students to hear.

“They wanted to have a discussion about incarceration, black men and being incarcerated,” Williams said. “So, I thought it was an excellent Idea, not to watch the movie, but to get audience responses to the clips and what their thoughts are about this topic.”

“Overall, I think it was a really good event for them to highlight the important issues that happened historically but that are still present in our nation,” Starling said.

Hagler said that he was happy that Eastern President David Glassman voiced a prominent issue on campus.

“I think it turned out great, we got our point across, we’re thankful that President Glassman came and spoke about the topic of the racist papers that’ve been posted around campus,” Hagler said.

Williams said that the attendance for the event was low, but that it was a good conversation.

“Attendance is down,” Williams said, “but sometimes we get six people with a good discussion, an intimate discussion, so that’s fine too.”

Starling said that one of the most important parts of the conversation was the discussion on the ‘Preschool to Prison Pipeline’.

“One of the topics they talked on was the school to prison pipeline, and that’s also a topic that I’m interested in doing my thesis proposal on and I think that’s an important area to highlight,” Starling said.

Hagler stressed that this conversation was an important one in the country today saying,