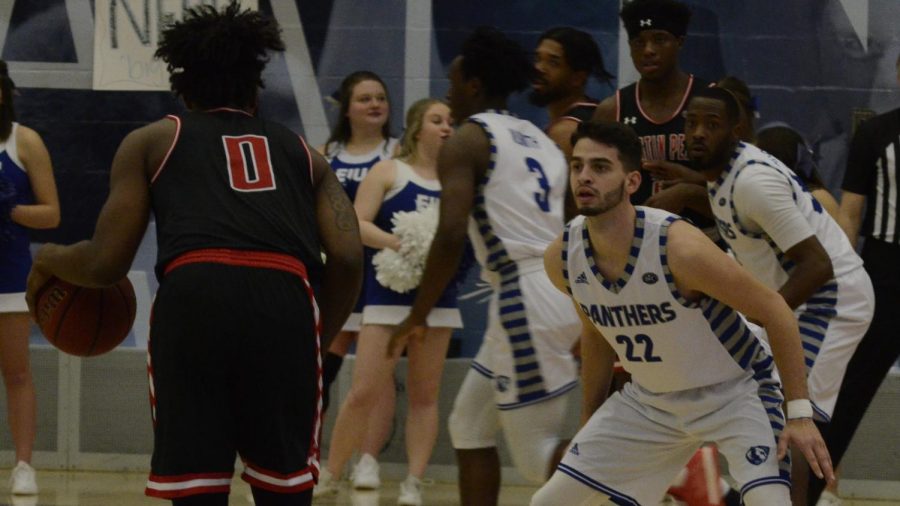 Southeast Missouri gave Eastern a scare, but it did not matter as the Eastern men’s basketball team defeated the Redhawks 72-70 on the road and secured an OVC Tournament spot.

In fact, Belmont defeated Tennessee Tech with about 10 minutes left in Eastern’s game, so win or lose, Eastern had a tournament spot no matter what.

That means that no matter if Eastern wins or loses against Southern Illinois Edwardsville Saturday, the Panthers will be the six seed in the tournament.

Depending on how Jacksonville State and Morehead State finish their games Saturday, Eastern will face either in the tournament Wed. March 4 at 8:30 p.m.

In the first six-and-a-half minutes of the second half, the Redhawks went on a run to give Eastern a scare early on the half.

The Redhawks went on a 14-6 run to bring themselves within two points, 42-40. Eastern started playing slower and missed shots, including five layups early in the second half, and the Redhawks started getting better shot opportunities and converting them.

Even if Eastern made a basket, the Redhawks countered on the following possession by matching with a basket of their own.

Eastern’s shooting in the second half was fairly mediocre, as the Panthers shot 38.2 percent after shooting 48.5 percent in the first half.

With two minutes left in the game, Southeast Missouri’s Skyler Hogan stole the ball from Josiah Wallace and made a layup on the fast break to give the Redhawks a 68-67 lead, epitomizing the fight they put up against Eastern in the second half.

After Hogan’s layup, Wallace was fouled on the following possession on a drive and made both of his free throws, giving Eastern the lead again, 69-68.

After a miss from Southeast Missouri, Wallace made a floater in the lane to give Eastern a 71-68 lead with 57 seconds left in the game.

With 20 seconds left, Wallace, who scored six of Eastern’s seven points in the final three minutes, settled for a three-point shot, which gave the Redhawks a chance to tie the game before the final buzzer.

Eastern rejected any Redhawk opportunities for a clean three-point shot in the closing seconds, and the Redhawks had to take a timeout with six seconds left.

Quatarrius Wilson made a layup after the timeout, making the score 71-70 in Eastern’s favor, but there were only five seconds left.

Eastern’s Shareef Smith was fouled with 4.5 seconds left, and he made only one free throw, opening the door for Southeast Missouri to tie the game or win it.

After timeouts from both teams, Southeast Missouri’s Alex Caldwell shot the ball too late, as the final buzzer sounded (the shot missed anyway), giving Eastern the 72-70 win.

Wallace led Eastern with 29, his seventh-straight game with at least 20 points. He got his 21st point when he made a layup with 11:21 left in the second half.

Along with Wallace, Marvin Johnson (11 points) was the only other Panther to score in double figures.

Eastern was paced by three main scorers in the first half: Johnson (six points), Wallace (13 points) and Mack Smith (eight points), as the Panthers carried a comfortable 36-26 lead into halftime.

Johnson gave Eastern a big boost off the bench early in the game, substituting in for Smith early when Smith got called for a foul just a minute and a half into the game.

Johnson had a steal a minute after subbing in, and had six points, four of which came in transition.

Wallace got going shortly after, subjecting Southeast Missouri to the same torment he has to other OVC teams in his career.

He used his great dribbling ability to get around defenders for layups, he took mid-range jump shots and he used a spin move or two to get some shots off.

Overall, Wallace shot 6-of-10 in the first half and led all scorers with his 13 points (one free throw made).

Even with Johnson’s scoring early in the first half and Wallace’s scoring in the middle of the half, the Redhawks hung around by staying within five-or-so points, making baskets at times to bring themselves within three points of Eastern.

But once Mack Smith made his first three-pointer, which extended his streak of consecutive games with a three-pointer made to 78, the Panthers started to pull away.

Smith was 0-of-2 from three-point range until he made his first three-pointer with 4:49 left in the first half, which gave Eastern a 25-19 lead.

After a made layup by the Redhawks’ Wilson, George Dixon, who did not score in the first half, grabbed an offensive rebound and kicked it out to a wide open Mack Smith.

Smith was wide open and had time to set up his shot, which brought about a head shake from the Redhawks’ head coach, and Smith drained the three-pointer to give Eastern a 28-21 lead. After that, over the last 4:12 of the half, Eastern finished on an 8-5 run.

Eastern’s defense stepped up late in the first half, but the Redhawks also missed good shots they got for themselves.

With other results in the OVC, Eastern Kentucky secured the four seed for the OVC Tournament, and Tennessee State secured the fifth seed.