If approved, students’ Textbook Rental fees would increase from $9.75 per credit hour to $18.43 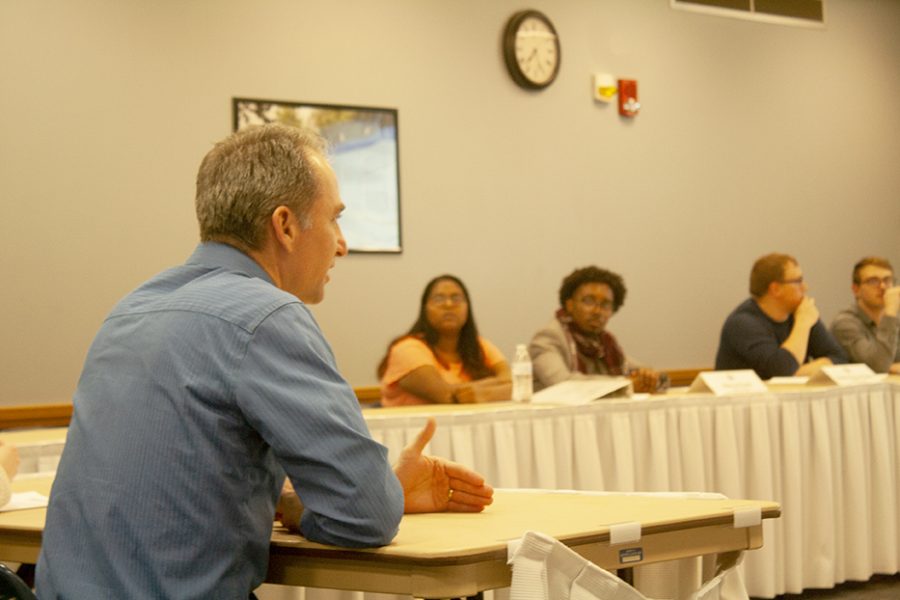 Jeffrey Stowell, chair of Textbook Rental task force, talks to the Student Senate Wednesday about 11 recommendations for why switching to digital textbooks would be beneficial.

The Textbook Rental Advisory Committee proposed 11 recommendations for going from physical textbooks to digital textbooks to the Student Senate, and if the transition is approved, students’ Textbook Rental fees will increase by nearly double. The student senators will review the proposal and provide feedback.

Jeffrey Stowell, chair of the Textbook Rental task force, said Eastern has always been about affordability, which worked in tandem with using physical textbooks because of their ability to be reused. But with the new digital model, students will not be able to reuse them, so it will cost more money. Stowell said costs also depend on the specific course in question.

Stowell said the benefit of going from physical textbooks to digital textbooks will be better student-textbook interaction. Students will also be able to highlight, copy, search and take their notes digitally.

Stowell said in addition, students will be able to access the latest content, and right now, by using the same physical textbooks each year, students are falling behind on information.

“Publishers, at least Pearson, have said when content is updated, it’s going first to the digital addition before textbooks,” Stowell said.

There are three important factors Stowell said he believes digital textbooks will help students with more than physical textbooks: accessing newer content quicker, lessening items in bookbags and interacting with the material in the digital textbook.

Stowell added if students add a course, they can have day-one access to the digital textbook, and if they decide to drop the class, they will not have to worry about taking the textbook back.

Stowell said he believes the worst part of having physical textbooks is that students do not have the ability to write in their own books, which helps many students the most.

He said the change has the potential to help the faculty teaching courses as well.

“Faculty won’t have to agree on a common book if they teach multiple sections because they’ll each get their own e-book, and it won’t matter because it’s the same cost,” Stowell said. “Faculty will be able to use the most current content, and for me, that’s important.”

Stowell said starting next fall, Textbook Rental wants to start some of the groundwork on who is going to get access first to this kind of piloting program.

Speaker Seth Yeakel said he believes the textbook rental advisory committee has the right ideas because it is trying to decrease the cost of digital textbooks, and the transition from physical to digital textbooks will benefit students in the long run.

Yeakel said if the proposal is approved, he hopes faculty will update their teaching styles and not only rely on the digital resources.

“Whenever professors rely on digital resources, we lose the ability to learn in some portions,” Yeakel said.