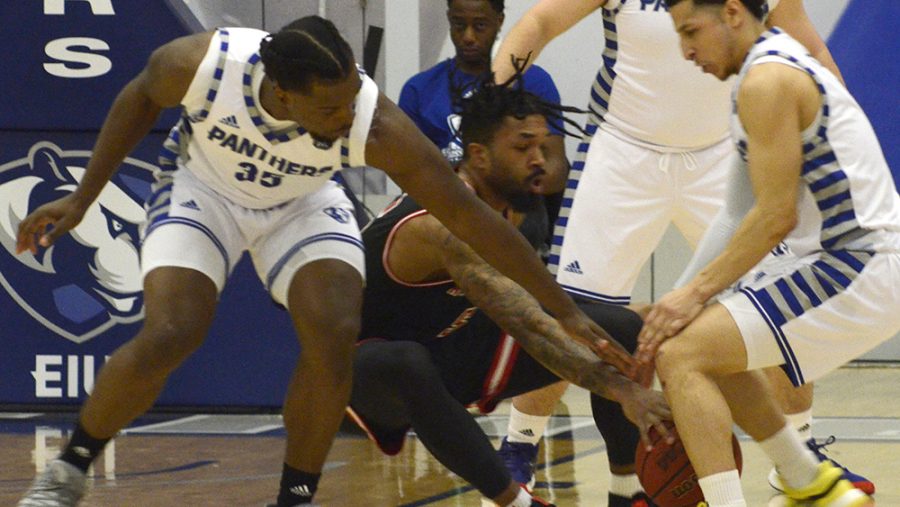 George Dixon (left), Logan Koch (middle) and Shareef Smith (right) surround an Austin Peay ball handler and reach in for a steal during Eastern’s 83-80 victory over Austin Peay Feb. 22 in Lantz Arena. Eastern can secure an OVC tournament spot with a win Thursday against Southeast Missouri.

The Eastern’s men’s basketball team’s journey to the OVC tournament has completely flipped from a week ago.

After two underdog wins, the Panthers can clinch an OVC tournament spot as early as Thursday night if they defeat the Southeast Missouri Redhawks.

Eastern is in sixth place in the OVC standings and has to finish in the top eight to secure an OVC tournament berth.

The Panthers must win against Southeast Missouri or Southern Illinois Edwardsville to clinch a spot. If the Panthers go winless, and Jacksonville State and Morehead State win one game, and Tennessee Tech wins both of its games, the Panthers would not make the OVC tournament.

The Panthers are coming off a two-game win streak against former first-place Murray State and Austin Peay. Both wins were comeback wins where the Panthers clawed their way back starting at the 11 minute mark to get those wins.

Against Austin Peay, Eastern was down 13 points with 11 minutes and 11 seconds left in regulation. The Panthers battled back and behind junior George Dixon’s two made free-throws at the end forced overtime. The Panthers defeated the Governors 83-80 in overtime.

The Panthers are led in scoring by junior Josiah Wallace who was named the OVC Player of the Week for his efforts against Murray State and Austin Peay, including his made game-winning three-pointer against Murray State. Wallace averages 15.1 points per game and is currently eighth in the OVC with that scoring average.

Southeast Missouri is 7-22 overall and 3-13 in conference play. The Redhawks are 6-6 at home and currently sit in last place in the OVC Standings.

The Redhawks are led in scoring and steals by Alex Caldwell. Caldwell averages 11.8 points per game and has recorded 28 steals this season. The Redhawks as a team are outside of the top-five in every statistic in the OVC. The closest they are in any statistics is they are sixth in the OVC in free-throw percentage.

The Panthers will tip off against the Redhawks Thursday at 7:30 p.m.