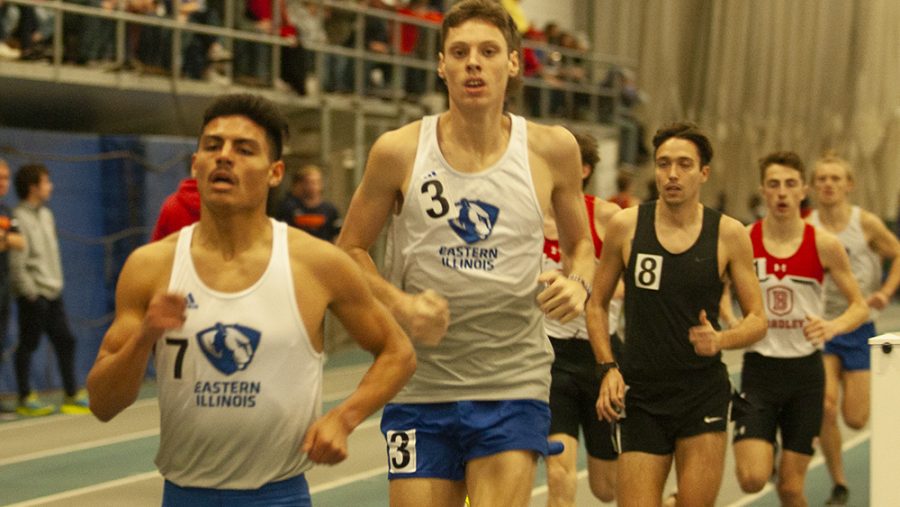 The Eastern men’s and women’s indoor track and field teams opened day one of the Ohio Valley Conference Indoor Track Championships with distance medley relay wins from the men and women, plus other strong individual preliminary times.

On the men’s side, the relay of sophomore Franky Romano, senior Anthony Bello, sophomore James Allen and sophomore Nick Oakley took first in the one-day event with a time of 10:o8.00.

That marks the group’s best time of the year, meaning Romano, Clay, Allen and Oakley end the conference season with the top conference time, barring a change at the NCAA Championships.

The women’s team also leads the conference in the event after the first-place finish. This is the first time since 2011 that the men’s and women’s teams swept the distance medley relay.

All other track events were in the preliminary rounds except for the 5000-meter, and the Panthers faired well in that event also, as sophomore Dustin Hatfield took second with a 14:47.09 time.

Hatfield came into the championships ranked first in the OVC with a conference-best time of 14:18.91 at the Iowa State Classic from under two weeks ago.

Sophomore Jaime Marcos, who ranked second in the conference entering the event, finished seventh at 15:00.01.

In the preliminary events, senior Shandall Thomas led the field in the the 60-meter at 6.82, while sophomore Payton Powell qualified for the finals after posting a 7.00 time despite entering ranked 11th in the conference.

Senior Anthony Bello, who was ranked third in the OVC, did not qualify for the finals with a time of 7.19.

The 60-meter hurdles preliminaries were also led by an Eastern athlete, as sophomore Jekeel Suber set the pace at 8.29.

For the women’s 60-meter hurdles, freshman Shanisa Stinson finished second with a time of 8.79, putting her through to the finals Thursday.

In the 800-meter, freshman Adam Swanson also qualified for the finals as he led the field with a time of 1:53.81.

Day two begins Thursday at 9 a.m. with the pentathlon, with field events set to follow at 12 p.m., and the triple jump and track events start at 12:30 p.m. with the one-mile run.