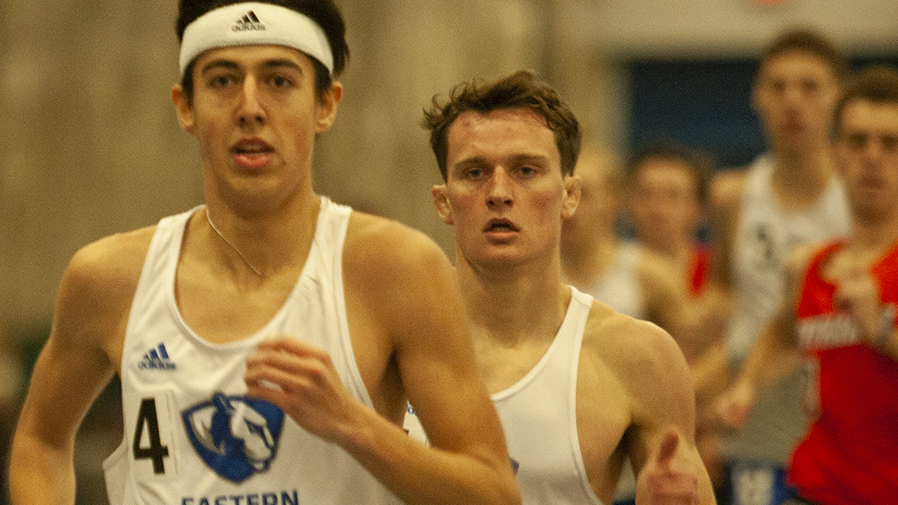 Dustin Hatfield headlines Eastern’s track and field team as the Panthers get ready to compete Friday.

Eastern will host the EIU Friday Night Special Friday in the Lantz Field House, and Hatfield comes into the competition as the last Eastern athlete to win an OVC Athlete of the Week award: The Ohio Valley Conference Male Track Athlete of the Week.

At the Notre Dame Meyo Invite, Feb. 7 and Feb. 8, Hatfield won the 3000 meter run with a time of 8:14.06, which is a personal best time. The time is also the current top time in the OVC for the event, and it ranks seventh all-time for Eastern. His performance at Notre Dame earned him the Athlete of the Week honors.

Hatfield has been named the OVC Athlete of the Week three times in his career, with the first time being last Spring. He also is the first Eastern athlete to win the award twice this year, with the awards coming in different events.

The first time Hatfield won the award this season was Jan. 18 at the EIU John Craft Invite in the mile event.

At the Meyo Invite, the only other male track athlete to podium for the Panthers was Joe Smith. Smith placed third in the triple jump with a jump of 50 feet, which is the second time he hit 50 feet in the event this season.

Despite not placing in the top five, Jaime Marcos placed sixth in the 5000 meter run with a time of 14:36.33, which earned him the top spot in the OVC for the event.

Shandall Thomas was the only other Panther to place in the top 10, as he finished ninth in the 60 meter dash with a time of 6.92 seconds.

For the women’s track and field team, only two Panthers finished in the top 10 at the Meyo Invite.

Lindsey Carlson, a four-year defender for the women’s soccer team and now competing in track for the first time at Eastern, continues to shine for the Panthers. She finished sixth at Notre Dame in the 5000 meter run with a time of 17:14.73.

That time moves Carlson up to fifth all-time for Eastern and No. 1 in the OVC.

The only other women’s athlete to finish in the top 10, Grace Rowan, finished eighth in the mile with a time of 4:53.89. That time moves her up to No. 4 all-time for Eastern, and she stays in the top spot in the OVC.

The EIU Friday Night Special is the last competition of the indoor track season before the OVC Indoor Championships, which take place Feb. 26 and Feb. 27 in Alabama.

Last Spring, in the EIU Friday Night Special, both the men’s and women’s teams finished third, and the Panthers ended the meet with 28 top 10 finishes overall.

If any Panthers make the NCAA Indoor Championships, they take place March 13 and 14. After that, the outdoor track season starts April 4.