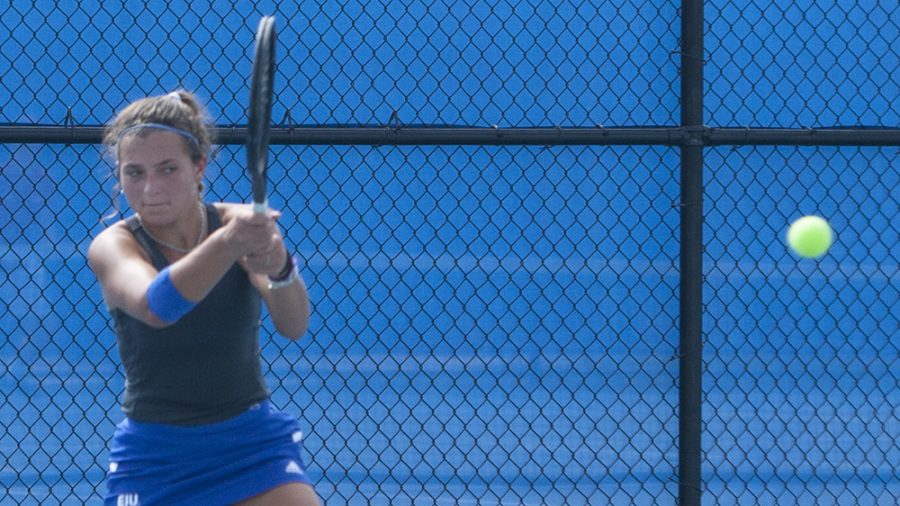 The Eastern’s women’s tennis team came back from a two-week break Sunday, losing to Valparaiso 5-2 in a road match.

The doubles point eluded the Panthers, which started the match off on the wrong foot.

Winning the doubles point is important for teams because it gives the winner of the point an early 1-0 lead to start the match.

Although Eastern did not take the doubles point from Valparaiso, the Panthers competed fairly well in all three doubles matches.

At No. 1 doubles, Rachel Papavasilopoulos and Elizaveta Bukraba-Ulanova were defeated 6-3. The other doubles match that was played out was the No. 3 doubles match, where Shelby Anderson and Christine Gouws lost 6-4, another fairly close result.

The No. 2 doubles match went unfinished, since Valparaiso already won the necessary two matches for the doubles point, but Karlas Contreras and Brittany Steven were on track to get Eastern one victory in the doubles portion, as they led 5-4 before stopping play.

Papavasilopoulos and Bukraba-Ulanova won their singles matches, both in three sets. Overall, four of the singles matches went to three sets, so the Panthers came close to pulling out a victory.

Papavasilopoulos defeated Claire Czerwonka after losing the first set and winning the final two, something she has done a lot this season: She won 3-6, 7-6, 6-3 to give Eastern its second and final point.

With her victory, Papavasilopoulos stays undefeated and improves to 7-0 on the season. Bukraba-Ulanova improved to 6-2, the second-best record on the team. The pair improved to 3-3 as a doubles tandem on the season with the loss Sunday.

Ellis dropped to 3-6 overall with her singles loss, and Steven fell to 4-5. Despite having a losing record in singles action, Steven has the second-most wins on the team so far this season.

Sunday was the first time Anderson and Gouws paired up for doubles matches, so they started their tandem at 0-1 for the season.

The loss Sunday is the Panthers’ fourth-straight. Eastern started the season strong, going 5-2 to start the Spring schedule.

The snowball of losses started Jan. 26, when the Panthers got shut out 4-0 by Illinois. After that, Eastern lost 5-2 to Eastern Michigan then lost 4-3 to Northern Illinois, so in its last three losses (including Valparaiso) the Panthers have been close in each match.

Eastern will finally start OVC play March 13 when they travel to Alabama to face Jacksonville State.