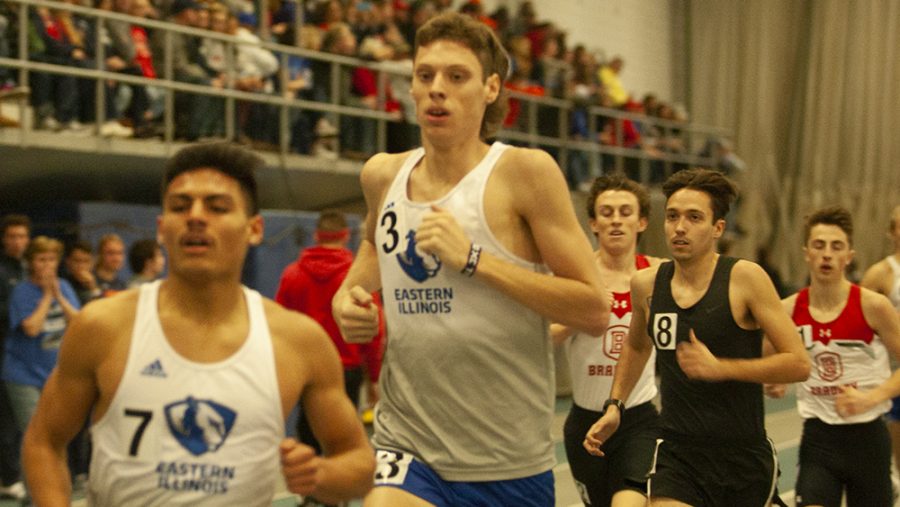 Eastern junior Jeremy Bekkouche (left) and sophomore Nick Oakley compete in the EIU John Craft Invite Jan. 18 in the Lantz Field House. Both the men’s and women’s teams placed first in the event.

Redshirt senior Grace Rowan and senior Lindsey Carlson move up to No. 2 and No. 4 on the Eastern all-time list for the 3000-meter as the men’s and women’s teams combined for two total first-place finishes in the Grand Valley State Big Meet in Allendale, Michigan this weekend.

Rowan’s time gives her the third-best mark in the Ohio Valley Conference, and Carlson takes the fourth-best time with her efforts.

Those finishes did not take home top spots over the weekend despite their all-time school impact, but junior Makenna Wilson did both for the women’s team after taking home first-place in the shot put with a 48-0 throw.

The first-place finish also gives Wilson the second-best mark in the conference behind Mikayla Thompson from Tennessee State, who leads with a 50-06.25.

Freshman Danielle Frank also moves up in the all-time list to No. 5 with her 24.90 performance in the 200-meter that netted her a 24th-place finish on the weekend.

One of the men’s team’s biggest finishes came at the Iowa State Classic tournament over the weekend, as redshirt sophomore Dustin Hatfield finished 19th in the 5000-meter with a time of 14:18.91 that moves him to seventh in Eastern history for the event.

Hatfield has now set Eastern all-time top ten times in both the 3000-meter and 5000-meter this season, sitting at No. 7 in both categories.

Back at the Grand Valley State Big Meet, though, freshman Brady Webb and senior Joe Smith took first and second, respectively, in the long jump.

Webb’s jump hit the 22-7 mark with Smith finishing at 22-3.75, moving Webb and Smith to fifth and sixth overall in the conference.

The Panthers finally return back to Charleston for the EIU Friday Night Special on Feb. 21.