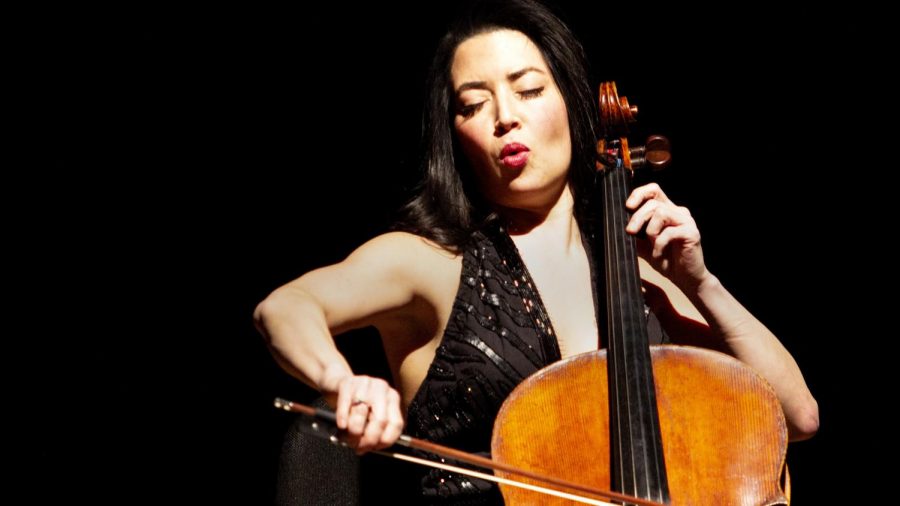 Kristina Reiko Cooper, a cellist, plays a solo peice during her concert, “Around the World with Love,” on Thursday night in the recital hall at the Doudna Fine Arts Center. One song Cooper and pianist Alexandra Joan played was called “Adagio and Allegro Opus 770” by Robert Schumann, who she thought of as one of the most romanitic composers.

Classical love songs from around the world were performed at the Doudna Fine Arts Center Thursday night by the Kristina Reiko Cooper Trio.

Cooper’s show, “Around the World with Love,” features herself on cello, Alexandra Joan on piano, and Satoshi Takeishi on percussion. The trio performed their own take on classical music from different eras and locations throughout the world.

The students who made the trek through the frigid weather were not disappointed.

“I always like the concerts at Doudna, and I always check them. I YouTubed her and I Googled her, and she seemed pretty great, so I said, ‘why not,’” said Yasmine Ben Miloud, a graduate student studying sustainable energy.

The themes of love and relationships coincided well with the approaching holiday for some.

“I liked the whole idea of a nice evening celebrating something before Valentine’s Day,” said Christine Kariuki, a graduate student studying sustainable energy.

Each piece had something to offer to each person in the audience, whether it be from the U.S, France or India, among others.

“I liked the piece that was from India; it completely took me away. I loved that one,” Miloud said.

The second half of the show featured extended solos from each of the members, and each piece was equally breathtaking. Cooper’s solo performance even included a vocal aspect, the only part of the evening that did so.

“When you have a program that’s an hour and a half long, sometimes it’s nice to have a little change,” Cooper said.

Many of the pieces did not include percussion, but for the last piece of the night, “A la Turk,” a traditional Gypsy piece, percussionist Satoshi Takeishi let loose with a drum solo that resolved itself at the last second as the other two musicians joined him in a crescendo of authentic, heartfelt music.

Of the selections the trio played, none of them were written solely for cello, piano, and percussion. That leaves Takeishi to interpret the classical music his way and put his own touch on the percussion parts.

“Some of the pieces have charts, a little bit, but he also improvs a bit too,” Cooper said. “And some of the songs don’t have any percussion, and he just puts something on top of it.”

Cooper was even able to play all of her cello parts without reading sheet music.

“That’s because I lose music all the time,” Cooper said. “Easier just to memorize it.”

The Kristina Reiko Cooper Trio received a standing ovation for their performance of love songs from couples young and old.