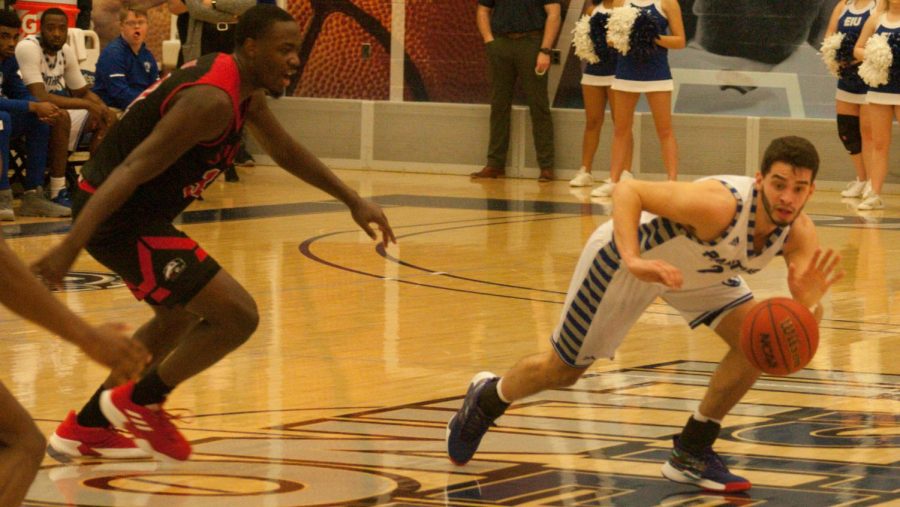 Adam Tumino | The Daily Eastern News Josiah Wallace tries to get around a defender during Eastern's 76-74 loss Thursday to SIUE.

It was a game where Eastern nearly came back once again just to fall short in the final minutes, and the outcome of a game with so much impact for the season drew such a response from the Panthers.

The difference was that Southern Illinois Edwardsville packed a defensive punch that Eastern could not shake for much of the Panthers’ 76-74 loss Thursday.

Josiah Wallace had a rough first half shooting-wise, and Eastern’s big men, namely George Dixon, showed frustration at times when trying to score inside.

It was clear that the Cougars came in with a solid defensive game plan against Eastern’s offense because Dixon, Jordan Skipper-Brown and JaQualis Matlock could not get off any clean shots inside, mostly in the first half.

Wallace started the game 0-of-5 shooting, and all of his shots were tightly-contested; even Wallace’s first basket, a three-pointer from the left wing, was contested fairly well.

Southern Illinois Edwardsville’s Cam Williams was tasked with guarding Wallace for much of the game, and Williams did a great job. It got to the point where, after Wallace missed a shot in the first half, Williams started trash-talking Wallace; Wallace gladly returned the favor and started making shots.

Mack Smith helped Eastern stay afloat in the first half in the defensive battle, leading all scorers at the break with 11 points, including two three-pointers. The score was a measly 32-31 lead at halftime, with Eastern barely holding on to the lead.

The Cougars’ defense really stood out against Eastern, as their inside defense was tight and disciplined, and they played with a physicality that Eastern had not seen much this year.

“They’re a pretty good defensive team, and they make it hard on you to post up,” said Eastern head coach Jay Spoonhour. “What you needed to do (in the first half) was work together and move the ball, and the ball stopped, too many times.”

Any time Wallace drove to the basket, looking for one of his typical shots in the lane, there was a Cougar defender there to make sure he had no clear path to the lane or shot attempt.

Dixon was held to one point in the first half, and in total, Eastern scored just eight points in the paint, a low number compared to Eastern’s usual output inside.

Offensively, the Cougars also had an effective game plan.

They forced Eastern’s big men to switch on to players on the perimeter, or they placed stretch forwards in the post who could step out and make perimeter plays.

This let the Cougars get a lot of points off drives or cuts to the basket, since Eastern’s biggest defenders were no longer down low to contend shots.

Eastern beat themselves a lot, not picking up a cutter who ran through the lane or who made a backdoor cut on the baseline.

“Mainly communication and just being aware that our wings were getting (cut on by backdoor cuts) and the help side should have been there more, but as you can see we weren’t prepared for that,” Dixon said.

These are the statistics that show how the Cougars’ defense and offense stepped up and handed Eastern a tough loss:

The Cougars outscored Eastern in the paint, 30-24. Hardly any of those points came from traditional post-ups, rather coming from cuts and drives to the lane.
Despite only grabbing one more offensive rebound than Eastern (11-10), Southern Illinois Edwardsville made the most out of them, scoring 20 second-chance points compared to Eastern’s eight.
In the first half, Eastern shot just 39.3 percent from the field, a testament to the Cougars’ defense. Eastern shot better in the second half, but the Panthers went 1-of-6 from three-point range in the second half and missed a lot of shots, some that were forced.

With the loss, Eastern’s remaining schedule now works against it.

The Panthers have three of their last five games on the road, and their two home games are against the top teams in the OVC: Austin Peay and Murray State.