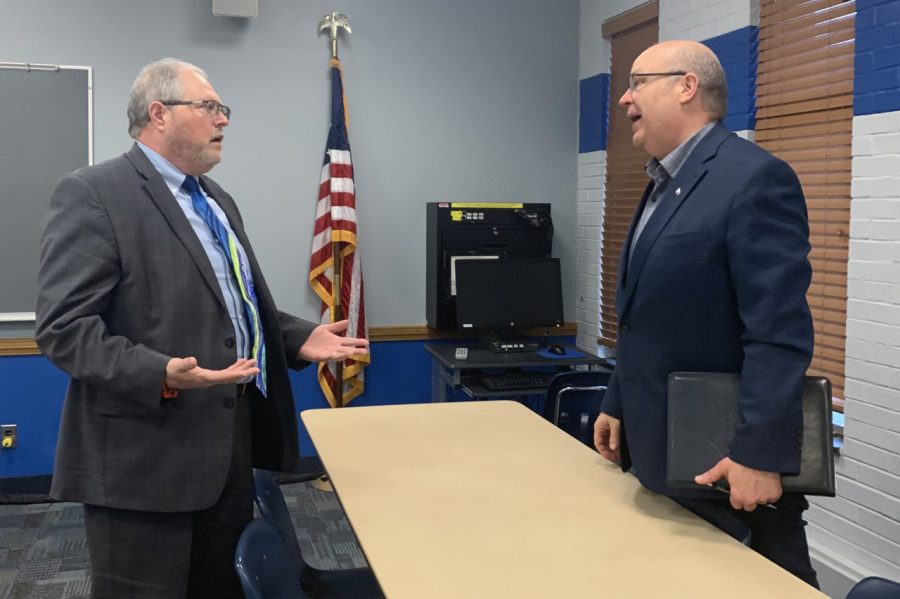 Philip Peña was the first candidate to come to Eastern to fill the Vice President of Business Affairs position and attend an open session interview Wednesday afternoon.

Peña is one of three candidates for the position that is currently held by interim VPBA Paul McCann who will be returning to his original role as Eastern’s treasurer after a becoming interim VPBA in 2014.

A second open session with Peña will be Thursday at 9 a.m.

The most recent employment listed on Peña’s vita was vice president for finance and administration at East Central College in Union, Missouri as well as the Chief Financial Officer/Treasurer and Chief Information Officer from 2012 to 2019.

During the open session Peña said he was interested in the VPBA position because “it’s a sweet spot” in terms of enrollment and campus size as well as Eastern’s commitment to growth and academic excellence.

He added that the region Eastern is in is appealing.

“There’s something about being a Midwesterner and being at a midwestern educational system at a regional campus that is special to me,” Peña said.

He said he also liked the way Eastern administration, faculty and staff talked about the university.

“You can see that there’s a really love of the institution that was verbalized,” Peña said.

Peña’s vita said that at his most recent employment he was responsible for “directing and supervising finance, facilities, auxiliary services (food service, bookstore, safety and security, print shop, risk management, purchasing), and information technology departments for main and remote campuses.”

Peña said one thing that is important to him is the value that will come from the decisions he makes even when it leads to extra cost.

“The (Master of Business Administration) in me says that we really have to produce value,” Peña said. “I really want to make sure that we’ve spent the money wisely but effectively but sometimes it takes a couple bucks to make up a couple bucks later on and I’m not afraid to say that to the administration, to the president saying that ‘I think that this is a really good value proposition here we really need to be doing something like this.’”

Peña emphasized the importance of maintaining student’s happiness while on campus and continuing that success after graduation.

“Here’s the finance guy in me: those students are our paycheck and I want to make sure that they’re there,” Peña said. “And the selfish me in the long term wants them to be really really good at what they do so that they’re contributing good tax dollars and a lot of tax dollars to my retirement and I think that’s a part of the role that higher education plays is that we are here for that four years but more importantly we’re here for their life.”

A part of how Peña said he believes students stay is by giving them access to different things that will keep them comfortable on campus.

Two other candidates will be visiting the campus.