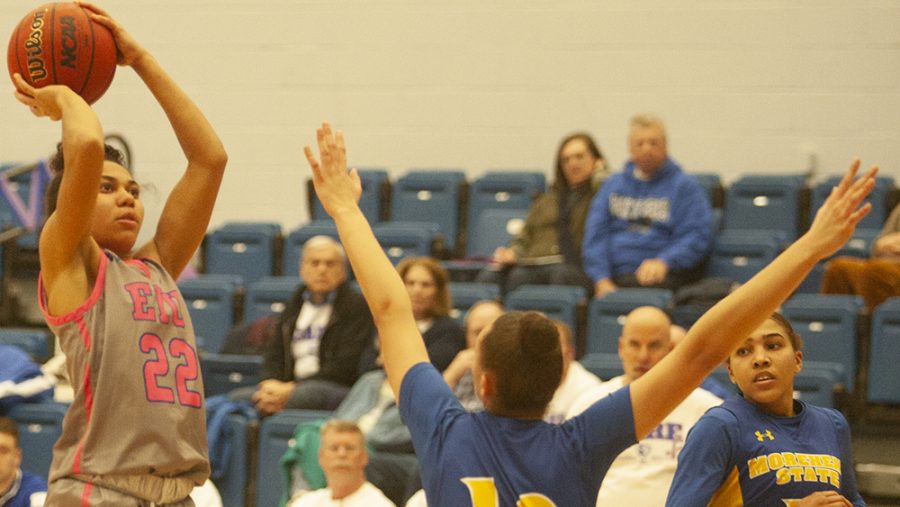 The Eastern women’s basketball team will play a home and a road game this weekend against two opponents in very different positions.

The Panthers (14-9, 8-4 OVC) will be home for the third-straight game Thursday when they will play last-place Southern Illinois Edwardsville at 5:15 p.m. The Cougars (3-20, 1-11 OVC) are on a 10-game losing streak, the longest active streak in the OVC by far.

The Cougars’ leading scorer is junior Allie Troeckler, who averages 10.8 points per game, which is 17th in the conference.

Troeckler is the only Southern Illinois Edwardsville player in the top 30 in the OVC in scoring.

Despite the Cougars’ struggles this season, Eastern head coach Matt Bollant is not overlooking them as an opponent.

“I told (the team), ‘look at how hard Morehead played against you and how aggressive they played against you,’” Bollant said. “Edwardsville is going to do the same thing. Edwardsville beat us badly twice last year; they’re going to come in here thinking they can do that again. We better be on edge and be ready to play.”

In the first matchup last season, the Cougars beat the Panthers 65-56 in Lantz Arena. Eastern shot 35 percent from the field but just 12.5 percent, 2-of-16, on three pointers, well below their three-point average last season of 34.5 percent.

Eastern scored more efficiently in the second game, but Southern Illinois Edwardsville did as well, beating the Panthers 78-62.

Karle Pace was held to just nine points in that game, but she has been much more difficult this season, especially lately.

Pace is averaging 18.4 points per game in conference play this season, the third-highest mark in the OVC. She has also made more three-pointers (36) in conference play than any other OVC player and is shooting an even 50 percent from beyond the arc in those contests, which also leads the conference.

Pace needs just six points against Southern Illinois Edwardsville to reach 1,000 points in her career, making her just the 25th player in program history to attain that milestone.

“It’s exciting obviously,” Bollant said. “It’s not the focus, but it’s kind of a bonus.”

Bollant also said that he has enjoyed watching Pace’s growth as a player in her first three seasons.

“It’s kind of a neat thing, especially for her,” he said. “She didn’t have any Division I offers when we recruited her, and now to come here in her junior year and score 1,000 points, it’s just been really neat to see her develop and how much better she’s gotten as a player. She can score in so many different ways.”

One of the two players scoring at a higher average than Pace in conference play is Tennessee-Martin’s Chelsey Perry, who is averaging 25.9 points per game against the OVC and will face Eastern on Saturday at 2 p.m.

“We’ve got to be able to handle the press against them, and I think you’ve got to be ready to go in the first quarter because they can jump on you right away,” Bollant said.

Perry was a handful for the Panther defense in the first meeting this season, scoring 35 points, 19 more than the game’s second-highest scorer.

Perry is a factor with her rebounding, as she averages 8.3 rebounds per game, which is fourth in the OVC.

Bollant said that limiting Perry’s touches is the key to possibly slowing her down.

“Once she gets it, boy she’s hard to stop,” he said. “Just trying to keep the ball out of her hands the best you can, and then when she does get it, get quick, aggressive double teams. And you can’t be late with the double teams. Last time we were trying to double her but we were late quite a bit, and you just can’t be late because she’s going to score before you get there.”