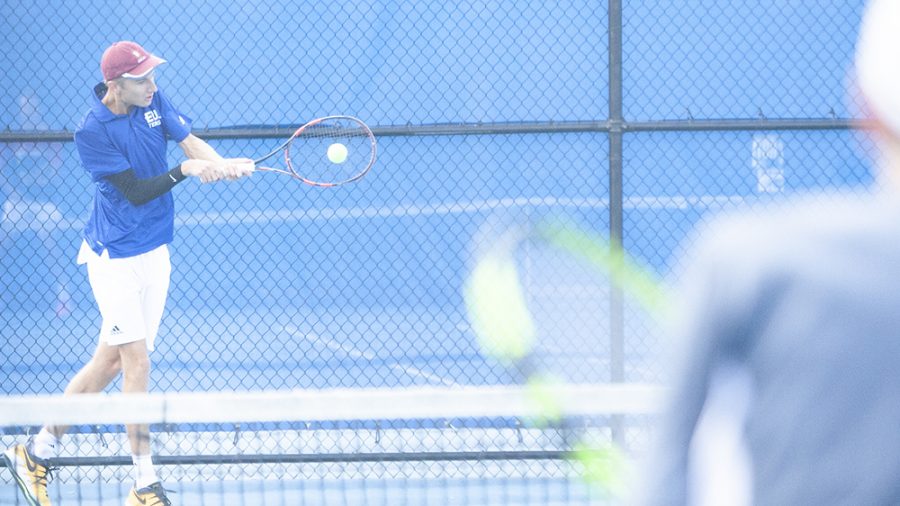 File Photo | The Daily Eastern News Max Pilipovic-Kljajic reaches out to nail a backhand return to his opponent. Eastern takes on Northern Kentucky Friday and hopes to end a losing skid.

A three-match losing streak is never fun, but the Eastern men’s tennis team is not worrying.

The team had a similar stretch where it lost four matches in a row last season, but the Panthers bounced back to win their next week’s matches. To finish the year, the Panthers had 13 matches and ended at 7-6.

Eastern does not have to travel far when facing Northern Kentucky at Dodds Tennis Center in Champaign Friday.

The Vikings came out victorious last year 4-1. The Panthers did secure the doubles point but did not earn any singles wins, and two matches went unfinished.

As far as the losing streak goes, senior Gage Kingsmith sees the potential this team has.

“I think we need to realize that we are a better team than we think we are,” Kingsmith said. “If we play with some more confidence we can compete and beat any team.”

Junior Mike Jansen is still battling a right wrist injury, which prompted him to not travel with the team to Oral Roberts. Jansen said his wrist has not improved much, and he was unable to practice Tuesday as well. He is also unsure if he will be able to compete this weekend.

Northern Kentucky comes in at 1-4, claiming its first win of the year against Thomas More University, before losing its first four matches.

Senior Andrew Niehaus comes in leading Northern Kentucky in wins with three, two of them at No. 3 singles and one at the No. 2 slot.

In doubles action as a team, the Vikings have just four wins total. The Eastern duo of senior Freddie O’Brien and Jansen won five consecutive matches, until losing to Ball State Feb. 2, and stand comfortably at 5-1.

Despite the recent slump, the Panthers can bounce back.

In the first seven matches last season, Eastern was 4-3; this year, Eastern is 6-1. Something that is not recognized all too often is before Chris Tolson became the new head coach last year, the Panthers have not seen at least seven wins in a season since 2013 and 2014.

On top of that, conference play has not started yet, and those are the matches that really matter.

After Northern Kentucky, Eastern has three more matches before beginning OVC play on the road against Jacksonville State, the only team ahead of them in the standings based on overall record.

The first home match for Eastern is against OVC opponent Tennessee Tech March 2, and they also play host to Belmont and Tennessee State, along with Rose-Hulman.