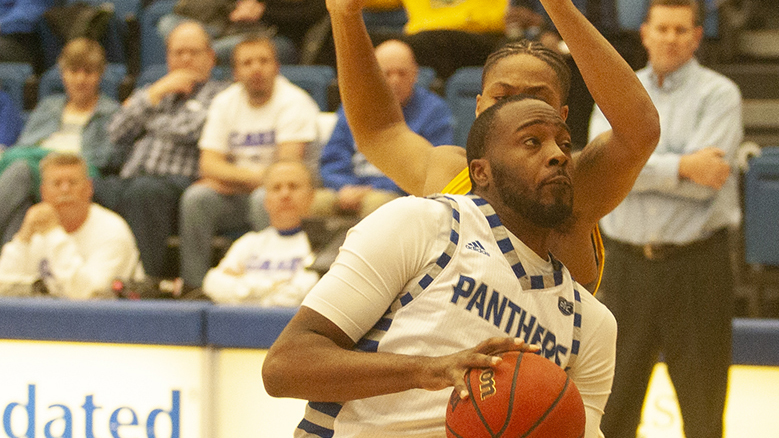 Adam Tumino | The Daily Eastern News JaQualis Matlock plays through contact from his defender to drive down the lane for a layup attempt. Eastern defeated Morehead State 71-65 Feb. 6 in Lantz Arena.

The Cougars are 3-9 in conference play with an overall record of 6-19. Their conference wins come against Belmont, Southeast Missouri and Eastern Kentucky. The 10th-place Cougars are 2-12 on the road this season.

“SIUE has some outstanding guards,” said Eastern head coach Jay Spoonhour. “They put a bunch of pressure on you offensively.  All of them are capable of having a big game, which is why they have victories over two of the best teams in the league.”

Junior Zeke Moore leads the Cougars in scoring with an average of 12.8 points per game. The Cougars also have the fifth-leading passer in the OVC in senior Tyresse Williford, who averages 4.0 assists per game.

The Panthers are 5-7 in conference play with an overall record of 12-12. The seventh-place Panthers are 8-1 at home this season with their only loss coming against fourth-place Eastern Kentucky.

Wallace leads the team in scoring with 14.1 points per game and also helps out with rebounding as he is second in rebounds per game for the Panthers with 4.5.

“Josiah has really been playing well for a long while now,” Spoonhour said. “His scoring and shooting lately have made it more noticeable, but he’s been defending and rebounding really well for a while now.”

Smith is currently tied for second all-time in NCAA Division I history with his streak of 73 consecutive games with a three-pointer made. Smith is coming off a 2-of-6 three-point shooting night against Morehead State, but he seems to bounce back after rough shooting nights and knocks down shots when the Panthers need them most.

The Panthers are coming off a 71-65 win against Morehead State and hope to carry their defensive presence into Thursday’s game against Southern Illinois Edwardsville. The game will tip off at 7:30 p.m. in Lantz Arena.

“I thought we had a tough, defensive mindset in our last game,” Spoonhour said. “When we’ve been successful this season, it’s been, in large part, due to that mentality. It needs to continue for us to accomplish what we want.”

Eastern’s game Thursday is part of an important stretch of games for the Panthers as they currently sit on the edge of the conference standings, tied for seventh place with Jacksonville State.

Eastern and Jacksonville State are two games ahead of the next conference teams, but Southern Illinois Edwardsville is one of the teams two games behind that can still compete for the eighth place in the standings.