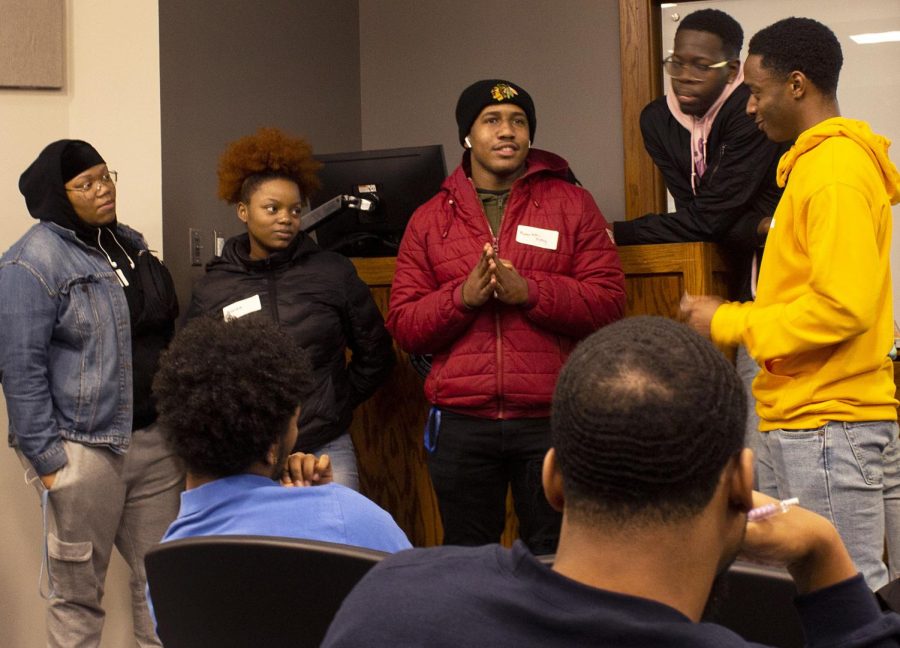 Students had the opportunity to participate in a game show in Lumpkin auditorium Tuesday, courtesy of S.T.R.O.N.G. MENtoring.

The game included questions about Nelson Mandela, Wilt Chamberlain, Emmet Till and other prominent black figures.

The night kicked off with a match between the Black Student Union and Eastern’s NAACP representatives.

Questions were typical “Family Feud” style in that a survey was taken of Eastern students to determine the relevance of the contestants’ responses.

After a back-and-forth match, the NAACP team won and continued to the “Fast Money” round, during which two of the winning team’s contestants were given one minute each to answer a matching set of questions and awarded points based on whether their partner got it right.

The NAACP team succeeded in amassing a total of 200 points, thus sealing their win.

The next match was a mix of fraternities against a mix of sororities, which the sororities won, but could not quite get to 200 points in the “Fast Money” round.

After all the matches were finished, two more survey questions were offered to the audience, for which the correct answer was rewarded with a t-shirt.

Anthony Bello, a senior business management major and S.T.R.O.N.G. MENtoring executive board member, said his organization put on the event so they could get their “name out there.”

“We tried to think of something fun that could get people engaged…,” Bello said. “That’s why we did ‘Family Feud,’ because you have to survey people for it.”

He said he believes surveying people brought in more interest to the event.

He also said S.T.R.O.N.G. was trying to get as much involvement as possible from the whole community at Eastern.

The purpose of S.T.R.O.N.G., or Successful Teaching Relative to Overcoming Negative Generalities, is to “stimulate the minds of our underrepresented male students and foster a climate that will enhance their abilities to overcome challenges that may hinder them from graduating,” according to the organization’s page on Eastern’s website.

Bello said the bottom line is to “create a safe space for minority males on campus.”

Another member of S.T.R.O.N.G.’s executive board, sophomore public relations major Bryce Smith, weighed in on how students and people in general can help support African American history during black heritage month.

“If you can support black business, that’s always a first,” Smith said.

Joshua Ware, senior applied engineering and technology major and another board member, said he puts together a list of iconic movies starring black protagonists, such as Selma and Fruitvale Station, to celebrate African American Heritage Month.

“You can enjoy the film and also learn at the same time,” Ware said.